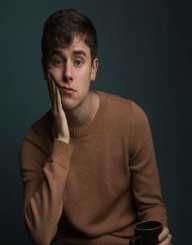 Tyde Levi Mellet was born on February 15, 2000, in Australia. When working, he prefers to use his middle name as though it were his last name. His parents are Laurelle and Shaun Mellet. His brother, Troye Sivan, is also a social media sensation. He also has a sister named Sagee and another brother named Steele.

Tyde Levi first joined YouTube in 2011. The first video he posted was a song called I’ve Got Nothing. However, he was not famous on the website it first. He added a small amount of fame to his account around the time that he also was becoming famous on another app, Instagram, in 2013. It wasn’t until he posted the video, Tyler Oakley's Boyfriend? in 2014 that he started to grow his fame.

Some of the great videos that Tyde Levi posts are video blogs showing his fans small parts of his life. He also posts music videos. Many of these videos are covers of already famous songs. He loves to tap more than anything else. He hopes to one day make a career out of it.

One of the other great things that boosts Tyde’s fame is that he often collaborates with other famous YouTube Personalities. Since his brother, Troye Sivan is a major YouTube star, just being related to him gives Tyde some extra fame. Plus, the two often appear in each other's videos. Some of the other YouTubers that Tyde Levi records videos with are Connor Franta, Chris Oflyng,  and Tyler Oakley.

In 2015, Tyde Levi was a part of the YouTube Fan Fest. The Fan Fest is a live YouTube event in which YouTubers from all over the world get together to perform. The festival is held in several different countries each year, making it easier for YouTubers from specific countries have the opportunity to act. Tyde was apart of the Australian festival. Tyde performed as an anchor on the show.

Even though Tyde is from Australia, most of his fans are from the United States. Because of this, Tyde Levi often tours the United States, appealing to his current fan base and trying to grow it at the same time. He has even taken up homeschooling to have more time for YouTubing.

Two other social media accounts he has is his Snapchat and Twitter. On Snapchat, he can post videos up to ten seconds long, as well as funny pictures. His name for his account is m.tyde. On Twitter, he mostly posts funny and short sayings. His name on this account is @tydelevi.

When not working on his videos, Tyde Levi works hard towards his goal of becoming a professional DJ. He often plays at venues around his hometown.  He also attends homeschooling, which he believes helps him to focus on his hobbies.