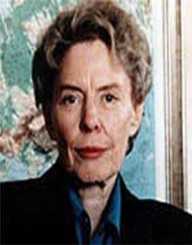 Jeane Duane Kirkpatrick was an American political scientist and diplomat. Born on November 19, 1926, she was the first woman to represent the United States as an Ambassador to the United Nations. Kirkpatrick who started politics as a Democrat later became a Republican and served President Ronald Regan as a foreign policy advisor during his 1980 campaign and later administration.

She also served in different capacities during Reagan’s administration including on the National Security Council, Defence Policy Review Board, Foreign Intelligence Advisory Board, and the chair of the Secretary of Defence Commission on Fail Safe and Risk reduction of the Nuclear Command and Control System.

Jeane Kirkpatrick is known for her strong anti-communist stance and the Kirkpatrick Doctrine that encouraged the support for authoritarian rulers around the world as long as they conform to Washington’s policies. Her reason was that "traditional authoritarian governments are less repressive than revolutionary autocracies."

Jeane Duane Kirkpatrick was born on November 19, 1926, in Duncan, Oklahoma to Leona (née Kile) and Welcher F. Jordan. She received early education at Emerson Elementary School. The family moved to Mt. Vernon, Illinois, when she was 12 year. While there, she attended Mt. Vernon Township High School and after graduating, enrolled at Bernard College of Columbia University.

She graduated in 1948 and did her associate degree at Stephens College, Columbia, Missouri. She also received her Ph.D. in political science from Columbia University in 1968. Kirkpatrick left for France for her postgraduate study at Sciences Po at the University of Paris for a year. It was during this period that she learned French.

Jeane Kirkpatrick started her academia circle at the Georgetown University in 1967. In 1973, she became a full professor of the university.

Jeane Kirkpatrick joined the youth wing of Socialist Party of America, Young People's Socialist League in 1945, while in college. She would later become a conservative. In the 1970s, she started taking an active part in politics by joining the Democratic Party. As a Democrat, she entered the presidential campaigns of the like of former vice president Hubert Humphrey, and Henry Jackson.

In 1979, she published the article “Dictatorship and Double Standards in Commentary." The article came to the attention of President Ronald Reagan, and he then made Kirkpatrick his foreign policy adviser during his campaign in 1980 and subsequent presidency. It was the first time she worked with a Republican. Serving under President Reagan, Kirkpatrick switched to become a Republican in April 1985 after delivering the keynote address "Blame America First" at the Republican Convention in 1984.

Jeane Kirkpatrick supported several authoritarian regimes and asked for the United States support for such countries. She asked for the US support for El Salvador military regime during President Reagan’s administration. She became a proponent of the Argentina military dictatorship after Argentina invaded the Falkland Islands, which led to the Falklands War. She was fingered in the Iran-Contra Affair, in which the US secretly sold weapons to Iran, with the funds sent to Contra rebels in Nicaragua.

Ambassador to the United Nations

President Reagan appointed Jeane Kirkpatrick as the US Ambassador to the United Nations during his administration. She served from 1981 to 1985.

After her political appointment, Jeane Kirkpatrick returned to the teaching field by joining the Georgetown University. She also became a fellow at the American Enterprise Institute and contributed to the American Freedom Journal. Kirkpatrick co-founded the public policy organisation, Empower America in 1993.

Jeane Kirkpatrick authored several books including The New Presidential Elite: Men and Women in National Politics, 1976, Presidential Nominating Process: Can It Be Improved, 1980, Dictatorships and Double Standards: Rationalism and Reason in Politics, 1982, The United States and the World: Setting Limits, 1986 and The Reagan Doctrine and U.S. Foreign Policy, 1985. Others are Legitimacy and Force: Political and Moral Dimensions, 1988, Legitimacy and Force: National and International Dimensions, 1988 and The Withering Away of the Totalitarian State – And Other Surprises, 1992.

Jeane Kirkpatrick married Evron Maurice Kirkpatrick on February 20, 1955. The couple had three children, Douglas Jordan, John Evron and Stuart Allan. Maurice died in 1995. Jeane was diagnosed with heart disease. She died on December 7, 2006, from congestive heart failure at her home in Bethesda, Maryland. She was buried at Parklawn Memorial Park in Rockville, Maryland.

Jeane Kirkpatrick was a receiver of the US highest civilian honour, Presidential Medal of Freedom. The Kennedy School of Government, Harvard, honoured her with the creation of the Kirkpatrick Chair in International Affairs. She also received several honorary degrees.