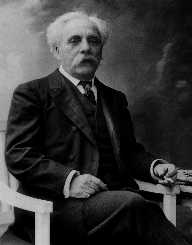 French Romantic composer, pianist, organist and teacher Gabriel Urbain Faure was born on the 12 May 1845. His parents were Toussaint-Honore Faure and Marie-Antoinette-Helen Lalene-Laprade, and he was the fifth of their six children. In 1849 his father was transferred to a school, the Ecole Normale, at Mongauzy. It was in the chapel attached to the classroom that Faure spent time playing the harmonium and where his musical ability started to become apparent.

After Faure’s musical ability had become apparent, he was sent to the School of Classical and Religious Music in Paris in 1854. He stayed at the school until 1865 studying church and choral music. Niedermeyer taught him composition. Subject reviewed also included harmony, counterpoint, fugue, piano, and plainsong. In the early 1861’s Camille Saint-Saens began teaching contemporary music at the school and Faure was exposed to the tune of Schumann, Liszt, and Wagner. Faure, a gifted student, left the having obtained a Maitre de Chapelle diploma.

His first position on leaving the Ecole Niedermeyer was that of chief organist at the Church of Saint-Sauveur at Rennes. Faure spent four years there and also took in private pupils for piano lessons. In 1870 he left this job and found a position as an assistant organist at the Notre-Dame de Clignancourt in Paris. He had not been on the job long when the Franco-Prussian War broke out, and he joined up.

Because of the political situation in Paris, France; the Ecole Niedermeyer school relocated to Switzerland and Faure taught there after the war had ended. He then returned to France in October 1871 and worked as a choirmaster at the Eglise Saint-Sulpice in Paris under Charles-Marie Widor. Around this time he joined the Société Nationale de Musique which was formed by Romaine Bussine and Saint-Saens in February 1871. Faure became secretary of the society in 1874. He left Saint-Sulpice in 1874 and worked at the Eglise de la Madeleine as organist Saint-Saens deputy.

Faure violin sonata as performed at a Societe Nationale concert in 1877 and was met with wide acclaim. He continued composing in his spare time but did not make much money from his compositions as he sold them outright and did not make any royalties from them. Later Faure became the inspector of music conservatories in the French provinces, and the increase in income enabled him to give up private teaching. He was then appointed the professor of composition at the Conservatoire de Paris in 1896 while continuing his role as the chief organist at the Eglise de la Madeleine.

Between 1905 and 1920 Faure was Director of the Conservatoire de Paris. Around the same time, he was also a music critic with Le Figaro.

Faure retired in 1920 because of issues with his hearing.

Faure was presented with the French Grand-Croix of the Legion d’Honneur (1920).

In 1877 Faure was engaged to Marianne Viardot, the daughter of Pauline Viardot. The engagement was broken off by Marianne in late 1877. He later married Marie Fremiet in 1883, and the couple had two children: Emmanuel Faure-Fremiet (1888) and Philippe (1889).