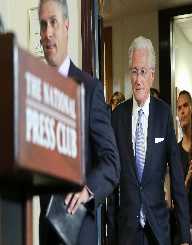 Mark White was born on March 17, 1940, in Texas, USA. His parents are Sarah Elizabeth and Mark White Sr.

As a child and teenager, Mark White spent his education in average public schools. He was a decent student, and he graduated from Lamar High School in 1958, when he was 18 years old. The following fall, he enrolled in Baylor University. In 1962, he graduated with a bachelor’s degree in business administration from this school. After earning his bachelor’s degree,  White attended Baylor Law School. It was here that he earned his J.D. in 1965. After this, he passed his bar exam and began his law career.

As a young adult, Mark White served in the Texas National Guard. He was a part of the 36th Infantry Division. He did not stay in this position for long.

For the first couple of years of his law career (beginning around 1965) he did mostly public service work. It was not until 1969 that he began working for the Reynolds, Allen, and Cook Law Firm. He worked here until 1973.

In 1973, Mark White became the Secretary of State in Texas. He held this position until 1977. While in this position, he worked hard to make government services more accessible to the public. He was considered to be good at this job.

In 1979, he was elected to be the State Attorney General for Texas.  In the same year, he also became a co-chair member of the Federal-State Law Enforcement Coordination Committee. It was also around this time that he was a part of the Governor’s Organization Crime Prevention Council. At this time, Dolph Briscoe was the Governor of Texas.

In 1981, he became a chairman of the Southern Conference of Attorney Generals. This was his most prestigious career post yet. It only inspired higher political inspiration. It was around this time that he had the goal of becoming the next Governor of Texas (Bill Clements was the Governor of Texas at this time).

In 1983, he became the Governor of Texas. Texas was facing hardships around the time that White was elected. The economy was suffering, as the price of oil was going down. Oil was one of Texas’s main exports. White tried to repair the economy, but not solely by selling oil. Mark White helped the state to focus on its other resources so that it would not be so reliant on oil alone. This plan worked, and the economy did get slightly better. Also as Governor, he took steps to improve education standards, transportation, and law enforcement. He also made tax reforms, which also helped to improve the economy. Mark White also advised other government members, restoring buildings and monuments, and doing other vital law tasks. When his term was up, he tried to run for governor again, but he did not win. He held the position of Governor until 1987. He was then succeeded by Bill Clements.

After finishing his term and Governor, White returned to practicing law. He worked at Keck, Mahin, & Cate Law Firm.

In 1990, he tried to run for Governor again, but he did not win. As of 2017, he works as a chairman of the Houston Independent School District Foundation Board (non-profit).

earned the Baylor University Meritorious Achievement Award and the Texana Medal of Service in 2012.

The Mark White Elementary School is named for him. Mark White once appeared in the western show, Dallas.