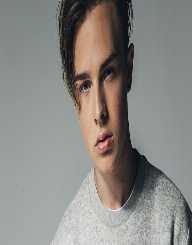 Mike Singer was born on 20th January 2000 in Offenburg, Germany and has a younger brother. He took part in a reality singing competition program “The Voice Kids” where he released his debut album called “Only You.” He is extremely a famous icon on the app musical.ly, with estimated followers of over 700,000 fans on his mike singer account. Besides, he is also a renowned Pop Singer, Instagram stars and also a YouTuber. Besides, he is associated with Darlene Vibares who competed The Voice Kid at the same time with Singer.

Mike Singer also signed with one of the great Ratey Video Productions. However, despite all these, the youngster had already established a prominent presence on YouTube. This was through releasing covers and original material as early as 2012. In 2013, the young author and performer of songs decided to participate in the famous show the Voice kids in Germany. Regularly referred to as the young German Justin Bieber, Mike Singer has a vast fan base following his speedy rise to new celebrity status. Checking out the numbers of his latest social media accounts speaks it all.

He has an estimated 339,587 subscribers on ‘YouTube,' 1 million and 86.4 K followers on ‘Instagram’ and ‘Twitter’ respectively. Teenage fan-girls follow him everywhere he goes, and he is kind enough to gratify them with warm hugs.

Rise To Stardom And career

Singer’s appetite for music started at his tender age when he was only 12 years old. Mike Singer began by frequently testing music and tried learning to play the guitar. Fortunately, he managed to become a part of the reality show ‘The Voice Kids’ while it was in Season 3, a year later just at the age of 13 years when he took part in the show. Mikes’ exceptional rendition of Justin Bieber’s ‘Boyfriend’ left most of the judges and his loyal fans very amazed. They too found the performance of the very appealing. For instance, Judge Lena Meyer-Landrut got his attention and went as far as hugging Mike for his delightful performance during this memorable episode. It was after this concert that Mike’s fan base started growing rapidly.

Mike Singer is only sixteen years old now and has released a single titled ‘KARMA’ which has globally turned into a super-hit. His first single generated an impressive 1,637,112 views until recently. He is currently working on his music album with ‘Warner Music,' which is scheduled to be released in February 2017. The second tour is lined up in 2017; this German youngster is promising to be the next big thing in the industry. Never before has any other artist at Mikes age achieved what he has. Maybe not in the near future too.

To a greater extent, Mike Singer has successfully maintained his perfect image among his growing global fan base. What most of his fans keep talking about apart from his singing talent is his most recent body tattoo decoration. The Germany youngster recently got a tattoo on his arm to commemorate his first hit single. He has the word ‘KARMA’ tattooed on his forearm. This tattoo symbolizes a breakthrough in his promising music career. All his fans are eagerly waiting for him to display it in his next tour when he is performing the title. The teenager has fallen in love with love songs and prefers them to all the other songs. Despite this fact, he has on several occasions claimed that he has still not experienced the reality of this emotion. It is the hope of all his fans that with time, he will find love soon if not fastest.

Mike Singer possesses a beautiful voice with an exceptional style of singing. He also has floored many of his loyal fans with his great looks and sense of elegance. Mike appears to be near to the prince charming many teen girls' dream. His passionate and heavenly blue eyes have made many people of the opposite sex skip a heartbeat. Besides, during his live concerts, Mike Singer is always super-energetic, permeates life into his performances and captivates his audience. He has always managed to engage his spectators at a fantastic level. His passion for his music comes transversely in his performances, both on stage and in his YouTube videos.

Life behind The Doors

In his childhood era, Mike Singer dreamed of becoming a cop when he grew up. Amazingly, he found his true passion in music. Most of his fans say that they are glad he did. His first performance as a singer was at a wedding where he entertained his audience with Bruno Mars’ ‘Just the Way You Are.' Which is his favorite song. The young star adores Justin Bieber so much that he is doing everything possible to be as prominent as him. Mike is truly a talented singer, and he has a brilliant future.