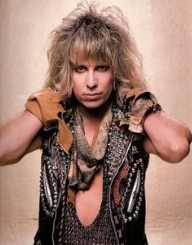 Vince Neil is the well-known lead singer of the heavy metal band ‘Motley Crue.’ The band has performed hits like, ‘Dr. Feelgood’ and ‘Girls, Girls, Girls.’ He has also made television appearances in films such as, ‘Still Standing’ of CBS in 2004. Notably, he has authored the book, ‘Tattoos and Tequila: To Hell and Back with One of Rock’s Most Notorious Frontmen.’

Vince Neil is a son of parents Shirley and Clois Wharton born on February 8, 1961, in Hollywood, California. His mother is of a Mexican descent while his father is from a Native American ancestry. His family later moved to Glendora where Neil attended Sunflower Intermediate School followed by Royal Oak High School. While growing up, Neil had a keen interest in music and other interests in surfing, wrestling, and baseball among others.

Vince Neil started his musical career in 1979 where he performed with his Rockandi. Later in 1980, he joined Motley Crue band as a lead vocalist and joined in playing its first album, ‘Too Fat for Love.’ In 1983, the band released another hit song, ‘Shout at the Devil’ which established them in rock and roll.

However, after the band compiled their first album, Vince Neil parted ways in February 1992 and formed Vince Neil Racing due to his interest in racing that he had taken a few years earlier. He retired from racing the same year after he crashed his car while racing in Long Beach. Later on, he signed a solo deal with Warner Brothers and released his first single, ‘You’re Invited' (But Your Friend Can’t Come) which he performed during the MTV Movie Awards.

Notably, he released his first solo album; ‘Exposed’ in 1993 which he featured Stevens Dave Marshall, Robbie Crane, and Vik Foxx. This album emerged at #13 on Billboard charts. Vince Neil also released his second single, ‘Sister of Pain’ followed by his third, ‘‘Can’t Change Me”, and his fourth, ‘Can’t Have Your Cake.’

In 1995, Vince Neil released an industrial-oriented album, ‘Carved in Stone’ produced by Dust Brothers that emerged #139 on the Billboard chart. He also released a single album ‘Skylar’s Song’ and ended his contract with Warner Bros. In 1997, Neil reunited with the Motley Crue band, and they're ‘Behind the Music’ aired on VH1 in 1998.

As a band, they released an album, ‘Generation Swine’ that emerged #4 on the Billboard charts. However, tension erupted within the band, and Tommy Lee exited forcing the group to replace him with Randy Castillo and recorded a new album, ‘New Tattoo.’ Unfortunately, Castillo died in 2002 due to cancer and the band went on a break. During this period, Vince Neil appeared as a cast member in the first season of ‘The Surreal Life.’

After settling disputes with Tommy Lee, the band performed the album, ‘Red, White ND Crue’ during a tour in 2005 and later in 2008, they released an album, ‘Saints of Los Angeles.’Vince Neil released his third solo album in 2010, titled, ‘Tattoos and Tequila,' a soundtrack to his book, ‘Tattoos and Tequila: To Hell and Back with Ine of Rock’s Most Notorious Frontmen.’
During the same period, he released another’s single from the album titled, ‘Track.' In 2012, he contributed to a cover of Japanese rock band in their song, ‘Blurry Eyes,' and participated in flight training for the PBS television series, ‘The Aviators.’

Vince Neil married Beth Lynn in 1981 but the couple divorced in 1985. He then married Sharise Rudell in April 1987 and had one daughter Skylar. Unfortunately; they divorced in 1993. During the same period, he started dating actress Heidi Mark and married in 2000 but divorced in 2001.

In 1995, Vince Neil put on hold his album ‘Carved in Stone’ due to his daughter, Skylar’s illness, who died at the age of four due to cancer. Neil founded a Memorial Fund in her honor that has raised awareness and funded children with various illnesses. He married, Lia Gerardini in January 2002 and the couple separated in 2010.