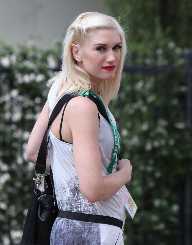 Gwen Stefani was born on October 3, 1969, in Fullerton California. Her first name was Gwen. She was one of four children born to Dennis. She is the co-founder and lead vocalist of the Band No Doubt. She was a leading singer, famous and great singer in the world of music. Her mother taught her stiching and designing, so she developed great interest in fashion and dress designing. Her love for music was encouraged by her elder brother Eric who gave a lot of performance and got his own band with his best friend John Spence as the famous singer.

Stefani when she was young she was more interested in folk music and famous artists like Bob Dylan and Emmylou Harris by her parents. Then she developed love for music. She studied in Lora high school in Anaheim California. She was dyslexic found by school counselor. When she was in school, she sang “I Have Confidence” from Sound of music.

Gwen Stefani gained popular in 1990 as the leading singer for the Rock ska- band No Doubt before starting solo career. She was successful in solo career. In 2000 new record released is “Return of Saturn. She has her own fashion label named in 2003 called I.A.M.Bwhich stands for (love Angel Baby) for her solo album. She expanded her career with her clothing and accessories lines. Her red lips. Blonde hair and dark eyes made her very attractive.

In 2004 she acted in Martin Scorsese s The Aviator and was selected for the screen Actors Guild award for outstanding performance by a cast in motion picture. Her second soloalbum The Sweet Escape released in 2006.was combined effort of many artists.

With Tragic Kingdom (1995) she turned as a leading force in popular music. In 1996 she reached top in album charts. This hit songs like “just a girl” ‘Spider webs and Don’t speak made band more popular. The video for the song made her fashion icon and a star she has sold nine million albums as solo artist.

Stefani found a lot of material in her failed relationship with Kanal. She gained inspiration for becoming popular in her pop music. She did well and featured very personal lyrics by Stefani. In the song Ex-Girlfriend, she expressed her frustration with break up. Other hit song of “Tragic kingdom” Excuse Me Mr and Spider webs which became popular well on the charts. In 2005 Stefani got American music award for favorite POP ROCK as female artist. She won two MTV video music awards in 2005 for the best Choreography for Holdback Girl.

She released her second album The Sweet Escape in December 2006, which contains new wave and dance music influences to explore more pop sounds. This was a great hit Stefani earned a Grammy Award nomination for her duet with Akon. Her third album solo album was this is what the Truth feels Like was released on March 2016.

Stefani reunited with her bandmates in 2012 performing together and working together for new album Push and Shove. The first studio album took nearly 11 years. The latest recording filled with Ska -influenced sound which made Stefani and band famous.

In 2014 Stefani took her career in new direction. She signed to become a judge on popular reality competition show The Voice. In 2014 October Stefani s third album released “Spark the Fire “song was produced by Pharell Williams.

In 2011 she donated $ 1 million to save Japan earthquake. In August 2015 Stefani and Rossdale announced their divorce. Third song “Used to Love you was released after one month. It gained moderate response and was single to be included in her third project. The second official single album “Make Me Like you” was accompanied by video that Stefani recorded live during the 2016 Grammy awards. Stefani began relationship with Blake Shelton in2015.

Stefani made most of the clothing design herself by trying different combinations. Andrea Lieberman introduced into fashion culture which led Stefani to launch fashion line named L.A.M.B IN 2004. In June 2005 she expanded her collection with less cost Harajuku lovers, which referred as “Glorified merchandise line. In January 2011 she became spoke person for LOreal Paris.

Stefani throughout her life as a solo artist, Gwen won many awards like Grammy awards, MTV video music awards and two Billboard awards, etc. Stefani has been referred to as “Pop princess” by music critics.