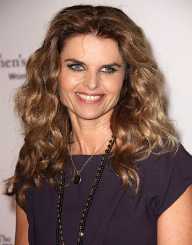 Maria Shriver was born on the 6 November 1955 in Chicago, Illinois to Eunice Kennedy and political, activist and diplomat Sargent Shriver. Through her mother, Eunice Shriver is related to the Kennedy political dynasty which included President John F. Kennedy, Senator Robert Kennedy and Senator Ted Kennedy.

Maria Shriver was a pupil at Westland Middle School, Bethesda, Maryland and in 1973 she graduated from Stone Ridge School of the Sacred Heart, a Catholic school in Bethesda. She then spent two years (1973-1975) at Manhattanville College before enrolling at Georgetown University. She graduated with a B.A. in American Studies in 1977.

Maria Shriver then spent a year as a co-anchor with CBS Morning News before moving to NBC News (1986-2004).

After her husband became governor of California in 2003, Maria Shriver served as First Lady until 2011. From 2013 she has worked for NBC news. Shriver is also a published author, and her publications include: Ten Things I Wish I’d Known Before I Went Out Into The Real World (2000), What’s Wrong With Timmy? (2001), And One More Thing Before You Go…(2005), Just Who Will You Be?: Big Question, Little Book, Answer Within (2008). Maria Shriver has also worked as a television and film producer including on the film Still Alice and the documentary The Alzheimer’s Project.

Maria Shriver married actor and bodybuilder Arnold Schwarzenegger on the 26 April 1986. They have four children: Katherine, Christina, Patrick, and Christopher. In 2011, after the discovery that her husband had fathered a child, a son Joseph, with a household staff member, Mildred Baena 14 years previously. Maria Shriver subsequently moved out of the family home, and the couple separated. The couple’s divorce was finalized in 2017. Shriver is currently in a relationship with Matthew Dowd.

Maria Shriver has been involved with many charitable organizations over the years including her role matching volunteers with agencies. She works with the Special Olympics which was founded by her mother in 1968, has made an award-winning documentary on Alzheimer's and also works with Best Buddies, which works to match mentors with the intellectually disabled.