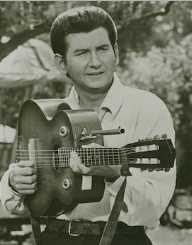 Roy Orbison was a rock singer at the beginning of the era of rock and roll in the rockabilly genre. One of the singer/songwriter's most notable songs is the 1964 hit “Oh, Pretty Woman.”

Roy Orbison was born on April 23, 1936, in Vernon, Texas. His childhood was filled with struggles as both of his parents lost their jobs during the Great Depression. The family lived in Fort Worth, Texas for a while before settling down in Wink, Texas.

Growing up, Roy Orbison was shy and quiet but enjoyed singing. His father gave him a guitar when he was six years old.

Roy Orbison attended Wink High School. There he started his first band, The Wink Westerners. They played at assemblies and radio shows.  Orbison was also in the marching band and singing octet. He graduated in 1954.

Roy Orbison enrolled at North Texas State College while continuing to play during the breaks with The Wink Westerners.  Eventually, he could not keep up with his school work, so he transferred to Odessa Junior College.

Roy Orbison started writing songs in the 1940s. In 1945, he earned a spot on a radio show for winning the contest with his first song “A Vow of Love.” He won a talent contest in 1946.

Roy Orbison played with a band of friends at events, radio shows, and eventually local television shows. By 1955, The Wink Westerners evolved with new members to make The Teen Kings.

Through their meetings on the local shows with famous guest stars such as Elvis Presley and Johnny Cash, Roy Orbison and the Teen Kings found their way to Memphis to record with Sun Records. Their first hit song was “Ooby Dooby.”

The Teen Kings broke up in 1956, but Roy Orbison stayed to work further on his songwriting skills. He had some success with it as well as performing some of his singles. It wasn't until 1960 when he developed his signature vocal talent in “Only the Lonely.”

It was his national breakthrough song that reached #2 on the Billboard Charts. His unique voice led to nine Top 10 songs and ten Top 40 songs.  Songs that made him famous included “Running Scared,” “Oh, Pretty Woman,” and “Crying.”

His success was so prominent in 1963 that he toured in England along with The Beatles before they gained their popularity in the United States. He toured around the world with other big names such as The Beach Boys and the Rolling Stones.

Despite his success, Roy Orbison s career started to fade at the same time that his record label Monument was taken over by MGM. Other personal tragedies occurred that affected his career.

Roy Orbison continued touring even though he could not find the inspiration to write at that time. A new record contract and new songs gave him top songs in other countries more than North America.

Roy Orbison's popularity returned when other singers and bands started to cover his songs. The hit from the 1960s “Oh, Pretty Woman” was redone by the rock band Van Halen. Linda Ronstadt sold millions of copies of her rendition of “Blue Bayou.”

In the 1980s, Roy Orbison became a member of the Traveling Wilburys along with Bob Dylan, Tom Petty, Jeff Lynne, and George Harrison. He was inducted in the Rock and Roll Hall of Fame in 1987. He re-released his hit songs and also recorded duets with many singers including k.d. lang.

Roy Orbison married Claudette Frady in 1957. She was the inspiration of one of his early songs titled “Claudette.” The couple had three children.  She died in 1966 in a motorcycle accident. In 1968, two of his children died in a house fire. Roy Orbison later married Barbara in 1969. They had two children.

Best Spoken Word or Non-Musical Recording, “Interviews from the Class of '55”, 1986

Best Rock Performance by a Duo or Group, Traveling Wilbury's Vol. One, 1989

Some people believed that Roy Orbison was blind. While he did have to wear corrective lenses for his eyesight, he started wearing his signature dark glasses in 1963. Some accounts state that he started wearing the sunglasses when he left his prescription glasses on an airplane.