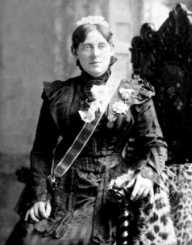 Florence Nightingale was born into an upper-class British family in Florence, Italy on the 12 May 1820. She had a fractious relationship with her mother who was class-conscious. Nightingale was a shy girl who did not want to be the centre of attention socially. Her father, William Shore Nightingale, was a wealthy landowner who had inherited estates in England. Her family home was Lea Hurst in Derbyshire.

As a child living on the family estate, Florence Nightingale became aware of poverty in the local village and would assist with ministering to the sick and needy. In her teens, she decided that she wanted to be a nurse. Her parents disapproved as nursing was not considered a suitable profession for young ladies in those days.

Florence Nightingale's father homeschooled her, and she was given classical training. In 1844, she enrolled at the Lutheran Hospital of Pastor Fliedner in Germany and began her nursing studies.

After qualifying as a nurse, Florence Nightingale moved to London and was employed at a hospital specialising in providing services for sick and elderly governesses. After a year she was made superintendent of the hospital, and during this time she was exposed to the problems of working in unsanitary conditions. An outbreak of cholera at the hospital led to her determination to implement hygiene measures.

Florence Nightingale and her team of nurses quickly set to work sanitising and cleaning the hospital. As conditions at the hospital improved and the death rate rapidly fell, soldiers began calling her The Lady With The Lamp. She continued her work at the hospital until the end of the conflict in 1956 and then returned home. Upon arriving back at her family estate, she was given a heroine’s welcome by the local villagers.

Florence Nightingale was awarded $250,000 by the British government as a reward for her work. She used the money to set up St. Thomas Hospital, part of which was the Nightingale Training School for Nurses.  She also wrote an influential book Notes on Matters Affecting the Health, Efficiency and Hospital Administration of the British Army which reported on her experiences in the Crimea as well as proposing measures to improve military hospitals. This publication was partly the reason that a Royal Commission for the Health of the Army was held in 1857.

She followed this publication up with Notes on Hospitals where she highlighted problems within public hospitals and measures to fix them. She was considered an authority on the running of military hospitals and was used as a consultant during the U.S. Civil War

Florence Nightingale suffered from Crimean Fever during her time at Scutari, and this compromised her health. She was mostly bedridden but continued working from home in Mayfair, London.

Florence Nightingale's work in the Crimea made her a heroine worldwide and led the profession of nursing to be seen as a suitable profession for women of all classes in England.  King Edward in 1908 awarded Nightingale the Merit of Honour.

Florence Nightingale never married instead of devoting her life to nursing.  She died in Mayfair, London on the 13 August 1910. She is buried in a family plot at Westminster Abbey, London.