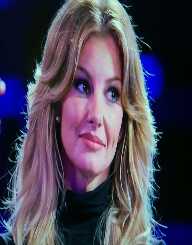 Faith Hill came into popularity as a pop-country singer.  From that point, Faith Hill has climbed the charts and pursued acting as well.

Faith Hill was born on September 21, 1967, in Ridgeland, Mississippi.  Her name at birth was Audrey Faith Perry.  She was adopted by Pat and Edna Perry in Star, Mississippi.  Faith Hill knew from an early age that she wanted a career in music.

Faith Hill sang at church, and her first musical performance was at a 4-H Club luncheon. As a teenager, Faith Hill started a country band that played locally at some events.

Faith Hill was active at McLaurin High School.  She was a cheerleader and prom queen.  After Faith Hill graduated in 1986, Faith Hill attended Hinds Community College for a year before heading to Nashville, Tennessee to get her start on her music career.

Stardom did not come right away for Hill.  Faith Hill took on some small jobs.  Hill was a receptionist at a music publishing company, but also sold t-shirts and fan merchandise for country music star Reba McEntire.

Faith Hill auditioned for a spot as a backup singer for McEntire but did not get the job.  However, it was while singing backup for Gary Burr at the Bluebird Cafe in Nashville that she was discovered.

Faith Hill's debut album, Take Me As I Am, was released in 1993. Faith Hill skyrocketed to success with songs such as “Wild One” and “Piece of My Heart.”  They both reached the number 1 spot on the Billboard country music chart. Her album was so successful that it became a triple platinum success.  It also earned her numerous awards for her achievement.

Faith Hill became the opening act for many big-name country stars in 1994 including Brooks & Dunn, Alan Jackson, and her idol Reba McEntire.  That next year, Faith Hill released her second album It Matters to Me with similar success to her first album

It was just the start of her long career in the music business.  The song “It Matters to Me” was the top-selling country song in the first half of 1996.  That same year, Faith Hill toured with Tim McGraw in the Spontaneous Combustion tour.

Along the way, they started a romance that resulted in their marriage in October 1996.

Despite marriage and children, Faith Hill continued producing award-winning albums and songs.  Her 1998 album Faith went platinum in the first six weeks of its release.  Songs like “This Kiss” and “Just to Hear You Say That You Love Me” helped her in the crossover into the pop music genre.

Her husband Tim McGraw joined her in a duet “Let's Make Love.”  They received a Grammy for that song and went on their second tour together called Soul2Soul.  That tour was one of the highest grossing country music tours in history.  The year 2000 was also the year that she showed off her acting ability in the remake of The Stepford Wives.

Faith Hill pursued other ventures when she was not releasing albums.  Her fragrance Faith Hill Parfums was available in stores in 2009.  Her second fragrance True was in stores starting in 2010.

Faith Hill married Daniel Hill in 1988.  The couple was later divorced in 1994.  Faith Hill then married fellow country singer Tim McGraw in 1996.  The couple has three daughters. After the release of her debut album, Hill sought and found her birth mother in 1993.  Though they are still in contact, Faith Hill does not publicize her name for privacy reasons.

Faith Hill established her charity organization in 1996.  The Faith Hill Family Literacy Project was inspired by her adoptive father's struggles with illiteracy.  Faith Hill would raise money alongside Warner Bros. Records and Time Warner. There were book drives at her concerts that would return those books to the schools and libraries and other agencies in the area.  All of the efforts are for the literacy of everyone no matter what their age.

Faith Hill along with her husband McGraw has helped victims of natural disasters including Hurricane Katrina as well as the 2010 flood in Tennessee.  They established the Neighbor's Keeper Foundation in 2005 to fund charities that assist in such cases of natural disasters.