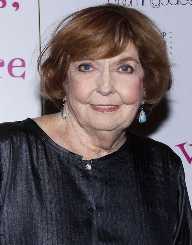 Anne Meara may be best known for her comedy performances with her fellow actor/husband Jerry Stiller. She had many appearances of her own.

Anne Meara was born on September 20, 1929, in Brooklyn, New York. Her parents Edward and Mary were both of Irish descent.  She lost her mother to suicide when Meara was 12 years old.

Anne Meara was a drama student at HB Studio in Greenwich Village in New York City. She also attended the New School's Dramatic Workshop for a year when she was 18.

Anne Meara was looking for a partner for a vaudeville act when she met Jerry Stiller at a talent agency.  In 1953 they found that they were a perfect match in comedy. The next year they were married. Meara was a member of the Compass Players.

This improv theater group is the first of its kind in the United States. It later became known as The Second City.  The duo performed on television as Stiller and Meara. Their acts included frequent appearances on The Ed Sullivan Show and The Tonight Show Starring Johnny Carson.

When their variety act started to slow down, Anne Meara acted in television series.  She had recurring roles in the 1970s in Rhoda and Archie Bunker's Place.  She had her series in 1975 called Kate McShane. While she was nominated for an Emmy Award, the show was canceled after ten episodes.

Anne Meara played the grandmother Dorothy Halligan in the TV show Alf and also wrote some of the episodes.  In the 1990s, she had a role in the television series Sex and the City as well as its movie version. In 1998 she also had a recurring role in the comedy show The King of Queens which also starred her husband, Stiller.

Anne Meara made her Broadway debut in the show “Miss Lonelyhearts” in 1957.  She appeared in “Eastern Standard” in 1989 and the revival of “Anna Christie” in 1993. Her lead role in “Anna Christie” earned her a Tony nomination.

It was also in the theater where Meara made a name for herself as a playwright.  She wrote the comedy “After-Play” in 1995.

Anne Meara was one of the stars and executive producers of the Stiller & Meara Yahoo! Web series from 2010 – 2011.

Anne Meara remained active in comedy and acting up to her death.  She taught at her alma mater HB Studio in classes such as technique and scene study.  She also wrote her reflections in 2009 through the blog Mr. Beller's Neighborhood – New York City Stories.

Anne Meara married fellow actor Jerry Stiller in 1954.  The couple had two children.  Their son Ben Stiller and their daughter Amy Stiller are both actors. Anne Meara converted to Judaism after her marriage.