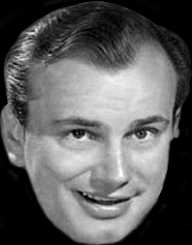 Jack Paar is a famed American host famous for his comedy skits on the radio and television during the 1960s to the 1970s. Paar hosted the Tonight Show for five years starting in 1957.

Paar married two women in his life. First to Irene Gubbins which he divorced and remarried to divorce again ultimately. His second wife was Miriam Wagner who he married in 1943 and bore him a daughter named Randy. Jack and Miriam were together for 61 years until his death on January 27, 2004, at the age of 84. He died in with his wife and daughter by his side at his home in Greenwich, Connecticut.

Jack Harold Paar was born on May 1, 1918, in Canton, Ohio to Howard and Lillian Paar. His family relocated and settled in Jackson, Michigan a few years later. Paar suffered from a suffering problem when he was younger but managed to overcome it. At 14, he contracted tuberculosis but managed to recover from it and ultimately withdrew from school at the age of 16.

He first found work as a radio announcer near his home in Michigan in a company called WIBM which in turn had him working in different stations in different states such as Detroit, Indianapolis, Cleveland and in Buffalo.

His work at the radio station was cut short when he was called in to render service at World War II.

In 1943, Jack Paar was called in for his military draft. During the war, he was known for his affable and good-natured humor which in turn got him assigned in the South Pacific at the USO to entertain the troops stationed there.  Paar was known to have gotten into a lot of trouble for imitating his superior officer which in turn led to the delight of his fellow men.

After his service to the military, Jack Paar did not return to the radio station to work but instead sought job opportunities in the field of film and network radio.

An opportunity came knocking in the form of Jack Benny, who saw Jack Paar's performance at the USO. Benny was deeply impressed at his performance that he recommended him to work not only as a panelist on the $64 Question show but also as a fill-in on The Breakfast Club radio. The American Tobacco Company, which was Benny’s sponsor at the time, liked the work that they had him line up for the show scheduled in fall. However, both parties had a fall out when Paar refused to do scripted gags and skits at the company’s suggestion, therefore, terminating their agreement.

Paar at the Tonight Show

Before his rise as a television personality at the Tonight Show, Jack Paar made his debut appearance in The Ed Sullivan Show during the early 1950s by hosting game shows.

In July 1957, the NBC network requested Paar to fill in for the spot of Steve Allen in the Tonight Show. The network was struggling by then due to Allen’s departure which led to signing Paar as a replacement. The show was initially called Tonight Starring Jack Paar but eventually was known as The Jack Paar Show starting in 1959. Although good-natured and smart, Paar’s tenure at the show proved to be unpredictable and emotional with one notable episode of him walking off the set due to censorship by the network. He returned to the program after a five-week absence and the network issuing an apology.

Thanks to his exposure at The Tonight Show, Jack Paar came to have his shows the following years, long after his retirement to the show. He had The Jack Paar Program which aired in the fall of 1962 which ran for three years until its final episode on June 25, 1965. In 1973, he appeared regularly in the Jack Paar Tonite. After the show, he made brief appearances in the late 1980s to the 1990s on selected television shows such as Donahue and Late Night with David Letterman.

Paar made a couple of retirements on television but continuously came back for appearances until his health decline on the 1990s. Despite this, Paar’s name has long been attached to The Tonight Show as one of its most celebrated hosts.