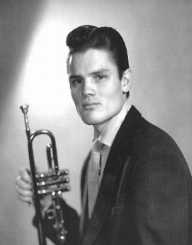 Chet Baker is an American musician known for his skills on the trumpet as well occasionally lending his vocals for his album records and for making appearances on selected films. Besides being an artist, Baker was also known for his drug addiction that shattered his career.

The Son of Musically Inclined Parents

Born as Chesney Henry Baker on December 23, 1929, at Yale, Oklahoma, his parents were Chesney Baker Sr. and Vera Moser. When Baker was ten years old, his family relocated and settled in Los Angeles.

Baker’s affinity towards the world of music has long been established with his father who used to work as a professional guitarist of which he traded for a regular job due to the Great Depression, and his pianist mother who settled to work at a factory specializing in perfume.

As a child, Chet Baker joined the local church choir and received the trombone as his first instrument from his father. The young Baker, later on, switched to the trumpet at the age of 13 for the trombone proved to be too big for him to play.

Baker soon gained mastery of his new found instrument and improved tremendously. He attended Glendale Junior High School for a short amount of time before dropping out at the age of 16 to enlist in the US Army in 1946. In the Army, he became part of the 298th Army Band and did his service in Berlin, Germany. He left the army after two years only to enlist again while he was attending El Camino College in LA. He also partook in the musical activities during his tenure at the military and finally decided to seriously pursue the industry after he being discharged in 1951.


Baker and the Gerry Mulligan Quartet

A year after his discharge in the military, Chet Baker had the opportunity to play alongside Stan Getz and Vido Muso, both skilled saxophonist players. Afterward, he played alongside Charlie Parker, a famed jazz artist. That same year, he met Gerry Mulligan. At the time, Gerry Mulligan’s band was without a pianist, regardless their combination of tones helped defined the genre of cool music.

Baker released a song entitled “My Funny Valentine” which became a staple track of Baker that transcended most of his other songs, even as a solo artist. Together with the band, they produced notable hits such as Bernie’s Tune and Walkin’ Shoes. The band regularly performed on popular jazz clubs in Los Angeles such as the Tiffany Club in Hollywood and The Haig which were prominent in the 1950s.

In due time, Chet Baker became an established trumpeter and established his band. He was even hailed as the top trumpeter in a 1953 issue of the Metronome magazine. Blessed with good looks along with musical talents, he appeared in the 1955 war film Hell’s Horizon. He declined further involvement in acting and chose to focus on their scheduled European concert then.

The Unfortunate Involvement with Drugs

Mulligan was also arrested for drug charges and was sentenced to prison in the early days of Chet Baker's addition to the band. Much of these can be alluded to Baker’s introduction to heroin, although he stated that he started using the drug much later in 1957 his bandmates begged to differ. He soon fell into addiction and even pawned his instruments for drugs. Even during on tour in Europe, he was arrested multiple times in Italy and the UK which ultimately led to his deportation to the US in 1964.

Baker also suffered physically for his drug involvement wherein he was beaten and was unable to play the saxophone for a period. This left the musician in a depressed and sodden state. Nevertheless, he picked himself up and made a comeback with help from Dizzy Gillespie. Gillespie arranged a concert held in 1973 for Baker at the NYC’s Half Note club and later on at Carnegie Hall, reuniting with old partner Gerry Mulligan.

Chet Baker died at the age of 58 on May 13, 1988. His body was found sprawled just outside the hotel he was staying in at Amsterdam. Traces of heroin and cocaine were found inside his body as well as on his belongings. Only a few weeks before his death, Baker delivered a stunning performance with the Hannover Radio Orchestra and the NDR Big Band. His remains are buried in  Inglewood Park Cemetery in California.