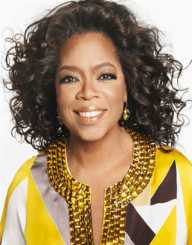 The life of Oprah Winfrey

Who is Oprah Winfrey?

Oprah Winfrey is a renowned American Television host, producer, and an entrepreneur. She was born to an unmarried mother on January 29, 1954, in Kosciusko, Mississippi. Her mother was Vernita Lee, and the father was based in a nearby Army base. He was called Vernon.  Oprah was raised in a simple environment by her teenage mother and afterward by her grandmother in the city of Milwaukee. The grandmother was so poor that Oprah wore clothes made of sacks. Her friends made fun of her, but she soldiered on.

At the age of three, Oprah Winfrey knew how to read and write due to her grandmother’s effort to teach her. She also instilled the love of God in her, and she would recite poems and read Bible verses in church. People realised how talented Oprah was and they nicknamed her "The little speaker." It is from here that she developed her acting talent. She nurtured the talent to reach tremendous achievements as an actress.

The name Oprah was not the original name given to her. She was named after the biblical Orpah. However, friends and relatives mispronounced the name as Oprah, and she eventually adopted the common name, Oprah.

After her terrible adolescent life marked by poverty, Oprah Winfrey was sexually assaulted by several male relatives and friends. She befriended a young man and won a beauty contest which positioned her to rise as a presenter on local radio.

Oprah Winfrey has succeeded by leaps and bounds to host her favourite Television show and develop a vibrant media network.

Oprah Winfrey was born in 1954 to a teenage mother. Her father was a soldier who did not marry the mother. Immediately after she was born, her mother set off to the North leaving Oprah with her grandmother. Oprah was raised in abject poverty by her grandmother. She spent most of her time with animals on the farm, and she would play drama with the animals. Her grandmother was a strict disciplinarian, and she guided Oprah through religion. She ensured that Oprah loved God and went to church. In the church, Oprah recited Bible verses and poems which led to her nickname “The little speaker."

Oprah Winfrey's grandmother showed her how to read and write when she was only three years. At the age of six years, Oprah went to stay with her mother, Vernita. The mother had busy days as a maid and paid little attention to Oprah. She started misbehaving and arguing with her mother. Oprah's mother decided to send her to the father in Nashville Tennessee. She continued living with the father until her mother became pregnant with her half-sister. She then went back to live with her mother and her half-sister, Patricia.

At age nine, Oprah Winfrey was sexually molested by her cousin, uncle and a family friend who were supposed to take care of her. When she was 13 years, Oprah was frustrated by the actions of the people she trusted. She ran away from home. Oprah became pregnant when she was 14 years. She gave birth prematurely and her son died shortly after birth.

Oprah Winfrey learnt writing and reading at an early age. Her grandmother taught her. She was enrolled in Nashville East High school. She did not know what she wanted to pursue albeit knowing it was to be art or drama. Oprah was elected president of the school and even met President Richard Nixon in a public speaking forum.

When Oprah Winfrey was about to complete her high school, Oprah was offered a job as news anchor at WVOL, a local radio station. She worked as a co-anchor at CBS television. A job she had declined severally before her speech professor convinced her to take it up. Oprah wanted to find a job outside Tennessee, and she landed one in Baltimore, Maryland. She chose the job over graduating which were coinciding. The company, however, sacked Oprah for being a poor reporter.

In 1978, her boss gave her a job as a host on a talk show "People are Talking." Oprah Winfrey felt at home hosting the show, and she knew that is what she wanted to do. She did for seven years before quitting. In 1981, Oprah distributed recorded shows to a talk show called A.M Chicago. They offered a job to host the show. In 1985, Oprah Winfrey featured in the movie" The Color Purple" as an actress. The film confirmed Oprah's prowess in drama and public speaking.

Oprah Winfrey reinvented the show and changed the name to "The Oprah Winfrey Show" in September 1985. The show was broadcast nationally in September 1986. In the same year, Oprah established Harpo Studios which grew immensely over the years producing quality works. The studio was the primary producer of Oprah Winfrey Talk Show. The show received accolades from the youths and elderly in equal measure. Oprah won major awards due to the educational topics she covered in the show.

In 1989, Oprah performed in "The Women of Brewster Place" and "Brewster Place." Oprah held a talk with Michael Jackson in 1993. The show was the most talked about and fourth most popular event in American television history. To show her love for books, she started "Oprah's book club" in 1996 to discuss books. Books presented in the show sold millions of copies.

Oprah Winfrey started publishing monthly magazines. The first issue was released in 2000. In May 2011, the finale of The Oprah Winfrey show was aired to bring down the curtains of her inspiring career.

Oprah Winfrey has risen the ladder and became a billionaire at the age of 32. She is the only African-American woman to appear in Forbes 400. She has produced quality Television shows that have motivated many people from all walks of life. Oprah has formed an organisation to help the needy in the community.

Awarded an Achievement Award from National Academy of Television Arts and Sciences in 1988.

In 2000, Oprah Winfrey was awarded Spingarn Medal by NAACP.

Hersholt Humanitarian Award (2011) from the Academy of Motion Pictures Arts and Sciences.

In 2013, Oprah received an award ‘Presidential Medal of Freedom.'

Oprah Winfrey has shared in her shows her predicament of sexual molestation while was still a young girl. Oprah has never been married. She has however dated several men including John Tesh and Roger Robert. She has been dating Stedman Graham for a long time. Oprah lives in California on a prestigious property named “The Promised Land” to symbolize the humble beginnings and acknowledge her success.

Oprah Winfrey has been involved in leading philanthropies. She started a network known as "Oprah's Angel Network" to provide resources to charitable groups dealing with the needy in the society. She has also funded non-profit organisations to help the society. She offers scholarships to needy students at Morehouse College. Oprah is considered one of the most generous persons in America.