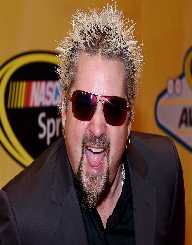 January 22, 1968, is the day the jack of all trades Guy Fieri was born. From being a game show host, television personality, author and a restaurateur, he has stood out at every stage. With many interests in the restaurant business, he owns one in California but still has licensed others to use his name in Las Vegas and New York. That is why he is widely regarded as the 'face of the network.'

Guy Fieri is the son of Lewis James and Penny Anne. Though he was born in Columbus, Ohio, he grew and spent most of his life in Ferndale, California. At the high school level, he studied in France where his interests in cooking and food were developed. The success in the restaurant management is attributed to the schooling in France during the high school education.

To finance his trip to France, Guy Fieri was involved in selling pretzels and washing dishes back at his hometown Ferndale. On completing education, he returned to work at the Red Lion Inn in Eureka before joining to college. He graduated with a hotel management degree from the University of Nevada and immediately started working for Stouffer as the restaurant manager.

After three years, Guy advanced to become a district manager of Trattoria with six locations directly under him. Together with Gruber as a business partner, California Pasta Grill became Fieri's first restaurant in 1996. Since then, up to 2014, Fieri in partnership with others has operated and managed about ten restaurants in different parts of America.

The passion of cooking landed Guy Fieri TV shows in 2006 that came as a breakthrough in his life and the media. He has participated in over ten shows as by October 2013. Some of these shows are still running to date while commanding a high rating from the viewers.

Some, however, never went past the second season because of production related issues and costs. His most renowned shows include - The Food Network in June 2006, Diners, Dives and Drive-Ins in April 2007, Ultimate Recipe Showdown in February 2008, Dinner; Impossible in 2007 and many more.

For such a successful career, you need a supportive family throughout. Guy Fieri currently resides in Santa Rosa, California with his wife, Lori. They got married in 1995. They are blessed with two sons, Ryder and Hunter. The marriage is significant because it influenced him to change his name once more.

With a grandfather of the Italian origin, he changed his surname from Ferry to the Fieri we have come to know. The changing of the name was a sign of honoring immigrant great-grandfather who was called Guiseppe Fieri.  He has a passion for classic American cars. That is why they constitute his entire garage. They include the 1971 Chevrolet Chevelle, the 1976 Jeep CJ-5, the 1967 Chevrolet C10 pickup, the 1969 Chevrolet Impala SS, among many others.

If you have heard of unique weddings happening around the world, this man has been there. In 2009, at the Wine Festival, he had been in charge of the ceremonies of about 101 gay weddings. In 2015, Guy Fieri supervised several celebrity weddings of people like Chef Art Smith. In that marriage, same-sex couples were in attendance as a sign of celebration when the ban on same-sex marriage was lifted

While running many television programs with a huge fan base, advertising followed automatically. Guy Fieri has appeared in various promotions, became a spokesman and appeared in several commercials in both 2008 and 2010.