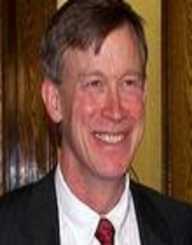 John Hickenlooper graduated from The Haverford School (1970) and then enrolled at Wesleyan University. After obtaining a BA in English (1974), Hickenlooper did an MA in geology (1980).

As a geologist, Hickenlooper relocated to Colorado where worked for Buckhorn Petroleum. After being laid off from the oil industry, he remained in Colorado. And in 1988, he started the Wynkoop Brewing Company with three friends. The four friends operated the first craft Brewery on Skid Row in Denver, located in the old J.S. Brown Mercantile building. The Wynkoop is still in operation and helped revitalise the LoDo area and intercity area.

John Hickenlooper became Mayor of Denver in 2003. When he first came into office, the city had a budget crisis, and that was one of the first tasks he had to address. In May 2007, he was re-elected as Mayor, winning 88% of the vote. During his time as mayor, he led to the campaign to pass FasTracks, a regional transportation initiative. He was involved in convincing 34 metro mayors to adopt the .04% sales tax increase unanimously. Hickenlooper recruited talented business managers to his cabinet, and he also streamlined the workforce by 7%. Hickenlooper resigned as Mayor of Denver on the 11 January 2011.

In January 2010, after Governor Bill Ritter said that he would not be seeking reelection, Hickenlooper decided to run for the Democratic nomination. In the general election, he won by 51% of the vote and was inaugurated as governor of Colorado in January 2011. He ran for a second term in 2014, winning 49% of the vote to his opponent, Bob Beauprez’s 46%.

Time magazine listed John Hickenlooper as one of the top five big-city mayors in the United States (2005).

Hickenlooper’s first wife was the writer Helen Thorpe (m.2002-div.2012). They share one child, a son Teddy. His second wife is Robin Pringle, whom he married on the 16 January 2017. Hickenlooper published a memoir, The Opposite of Woe: My Life in Beer and Politics.