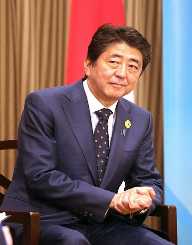 Shinzo Abe's primary education was done at Seikei Elementary School and Seikei Junior High School. Shinzo Abe then obtained a degree from Seikei University Tokyo in 1977. He then enrolled at the University of Southern California in Los Angeles and studied Political Science.

In 1979 Shinzo Abe took up a position with Kobe Steel and at the same time became involved in politics. He became a member of the Liberal-Democratic Party, and in 1983, he became secretary to the foreign minister of Japan. The foreign minister at the time was his father.

In 2005 Shinzo Abe became a cabinet for the first time when he was awarded the role of Chief Cabinet Secretary. He was viewed as a right-wing, outspoken, charismatic, telegenic politician with strong voter appeal. He was briefly prime minister in 2006, becoming the country’s youngest leader since World War II. Support for his government fell following a run of gaffes and scandals. One of which was the loss of government pension records which had an impact on fifty million claims. He stepped down as prime minister in 2007.

Shinzo Abe returned to the office of prime minister in December 2012 when his Liberal Democratic Party won a landslide victory. To date, he is the third-longest serving prime minister of Japan.

In 1982 Shinzo Abe married Akie Matsuzaki, the daughter of a former president of Morinaga & Co. The couple has no children.