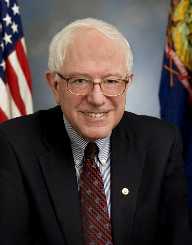 One of the topmost American Politicians is Bernie Sanders. He was even one of the candidates for the Democratic Nomination for the President of the United States in 2016. Currently, he serves as a senator from Vermont and is still a Democrat. He is known to be the longest-serving independent in US congressional history. As a politician, he has a great career with several decades of experience.

Bernie Sanders was the chair of the Senate Veterans’ Affairs Committee as well as the co-founder of the Congressional Progressive Caucus. Although he was born to Jewish Immigrants, he was very ambitious and intelligent. He also got himself involved in Civil rights movement as a student and was part of the organizers of the Student Nonviolent Coordinating Committee. He has always had an interest in politics, and this was what he developed to this stage. He became a mayor in 1981 before choosing to become a representative and then a senator.

Bernie Sanders was born in Brooklyn to Eli Sanders and Dorothy who were Jewish Immigrants from Poland. He was born on September 8, 1941, at the time when their family was a middle class one. His father survived as a paint salesman, and he has to survive in horror wrecked period of the World War II.

He, however, became interested in politics probably because of this. Bernie Sanders was known to be a very good student as he performed well. His mother died upon his graduation from Madison High School while his father joined her three years later. He studied at Brooklyn College before moving to the University of Chicago where he got himself involved in the civil rights movement as well as an organizer of the Student Nonviolent Coordinating Committee. He has his Bachelors of Arts degree in political science in 1964.

Bernie Sanders spent few of his years working in different jobs which include stints as a filmmaker and a freelance writer. He is known to have spent several months on an Israeli Kibbutz and grew his interest in 1960. By 1971, he became a member of Liberty Union Party and started working as a writer. He became the director of the Non-profit American People’s Historical Society after leaving the Liberty Union. By 1981, he won his first seat as the Mayor of Burlington Vermont with just 12 votes. At that period, he implemented several reforms in progressive taxation, child care, women’s rights among others. He was reelected three times defeating both Democratic and Republican candidates at that period.

However, in 1990, his fortune changed, Bernie Sanders won a seat in the US House of Representatives. At that period, he was an independent candidate. Seeing the fact that he needed a caucus, he entered a caucus with the Democrats and co-founded the Congressional Progressive Caucus; He was an outspoken individual that criticized the Iraq War as he was always concerned about the social and financial impact. He was a representative till 2006 when he became a Senator from Vermont on January 3, 2007.

Being an outspoken individual, he posted an open letter to Treasury Secretary criticizing the initial bailout proposal. He was praised for this receiving attention. Later on, he received media attention for his long speech against Tax Relief, Job Creation Act, and Unemployment Insurance Reauthorization. He became so acclaimed due to his speech and many thought he was the right person to become the president. Online petitions were signed to this effects. Bernie Sanders was a member of different committees including the committee on budget, health, education, pensions among others.

His popularity spread more like wildfire after the conclusion of the eight and a half speech he delivered against the Tax Relief, Unemployment Insurance Reauthorization, and Job Creation Act of 2010. His speech was later published as The Speech: A Historic Filibuster on Corporate Greed and the Decline of Our Middle Class.

Bernie Sanders married to Deborah Shilling who he divorced in 1966 before getting involved with the mother of his first son, Campbell Mott in 1969. Later on, he tied the knot with Jane Driscoll whose children were accepted as his. He presently has seven grandchildren.