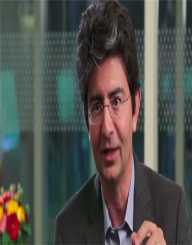 Iranian-American entrepreneur and philanthropist Pierre Omidyar was born on June 21, 1967, in Paris. His parents were immigrants from Iran, who were sent to Paris to attend University. His mother Elahe is an academic, who did her doctorate in linguistics at Sorbonne. His father was a urologist at John Hopkins University. The family moved to the United States for his father’s work.

Pierre attended the Potomac School in McLean, Virginia. In 9th grade, he developed an interest in computes. He later graduated from the St. Andrew’s Episcopal School in Potomac, Maryland. He got a bachelor’s degree in computer science in 1988, graduating from Tufts University in Massachusetts.

After finishing his studies, Pierre Omidyar went to work for Apple Company subsidiary Claris. He was on the team that upgraded MacDraw to MacDraw II. In 1991 he entered the private business by co-founding Ink Development- a pen-based computing startup company. It was later rebranded as e-commerce company eShop.

When Omidyar was 28 years old, he began writing code for the online venue, to enable direct person-to-person auctions. He launched his web page in September 1995, naming it Auction Web. The site eventually became known as eBay. The first item sold on the site was a broken laser pointer. Omidyar was astonished that anyone would buy something like that, but the buyer assured that he is deliberately collecting broken laser pointers. The business soon exploded when people began to register an unimaginable variety of trade goods. Since he collected a small fee from each sale, he was soon able to focus only on this project. In 1995, he signed a deal to offer airline tickets online. The site than hosted 250,000 auctions a day, but only two years later this amount grew to two million.

In 1997 Omidyar changed the company’s name to eBay and started an advertisement campaign. The company was originally founded to help Omidyar’s fiancée trade Pez candy dispensers. The story first broke out in 1997 to attract media attention but is officially confirmed by the company. The first employee of eBay was Jeffrey Skoll, who joined the company in 1996. He eventually became the CEO.From 1998 until 2008, Meg Whitman was the president and CEO of the company. As of 2008, Omidyar has 178 million shares of eBay, worth around $4.45 billion.

Pierre Omidyar was also interested in the news scene. In 2010, he launched an online investigative news service- Honolulu Civil Beat. The site was named the Best News Website in Hawaii for three consecutive years. In 2013, Honolulu Civil Beat partnered with The Huffington Post, launching HuffPost Hawaii.

Omidyar is also the head of a philanthropic investment firm Omidyar Network. The organization aims to help create opportunities for people to improve their lives. The organization has collected more than $992 million. In 2012 Omidyar and his wife, along with Richard Branson established the Nduna Foundation, Enterprise Zimbabwe.

Pierre Omidyar is married to Pamela Kerr. They currently live in Henderson, Nevada. Omidyar’s net worth as of September 2013, is $8.5 million. He is listed as the 123 richest people in the world. in 2011 he received honorary Doctor of Public Service degree from Tufts University. He was also named the EY Entrepreneur of The Year National Winner in 1999.