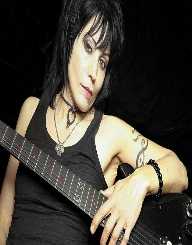 Joan Jett is an American singer and songwriter who is best known for her cover of I Love Rock ‘n’ Roll.

Joan Jett was born on 22 September 1958 in Wynnewood, Pennsylvania. Jett was raised in a practicing Protestant household. Her mother worked as a secretary and her father was an insurance salesman. When Jett was nine years old her family moved to Maryland. She got a guitar at age fourteen and soon after her family moved to Los Angeles County in California. It was in California that Jett’s interest in music blossomed and she was greatly influenced by the glam rock genre.

Joan Jett began her music career in 1975 when she formed the Runaways with Sandy West. Jett played rhythm guitar for the group and West played drums. Lita Ford was added as lead guitarist, Cherie Curry provided vocals and Jackie Fox was the band’s bass player. The band was part of the punk movement in California at the time and were strongly associated with The Ramones. The band signed with Mercury Records in 1976 and released a self-titled debut album. They toured extensively and played as the support act for Cheap Trick and Tom Petty. A second album was released in 1977, Queens of Noise. The album enjoyed moderate success in Sweden, where it broke into the top thirty. The Runaways enjoyed major success in Japan when they played a tour there in 1977. The band would be mobbed by fans and were only bettered in popularity in the country by Led Zeppelin, ABBA and Kiss.

At the end of the year the band underwent a number of line-up changes and Jett took over lead vocals. The first album with Jett on vocals was on the Waiting for the Night album. A fourth album, And Now… The Runaways, was released in 1978. The band was beset by internal conflict by this stage and officially broke up in 1979. The band is best remembered for the hit song, Cherry Bomb, which was written by Jett and reached number one in Japan and Scandinavia. A film about the Runaways was released in 2010. Kristen Stewart played Jett in the film, The Runaways. Jett produced an album for punk group The Germs shortly after the break-up of The Runaways.

Jett spent 1979 in England collaborating with the punk movement there. When she returned to America and found no label willing to sign her. She set up her own label with Kenny Laguna and named it Blackheart Records. Laguna wanted Jett to start a solo career, but Jett wanted a new band and made an advert for a backing band. Joan Jett and the Blackhearts formed in 1979. The original line-up was made up of Jett, the fifteen year old Gary Ryan, Eric Ambel and Danny O’Brien The band performed at the Whiskey a Go Go and then went on a European tour. The band struggled to support itself financially.

Jett and Laguna used their own money to print records and would distribute them out of their cars. After a concert at the New York Palladium in 1981 received rave review the band started to develop a die-hard following. Jett was signed by Boardwalk Records and they re-released her solo album and renamed it Bad Reputation. The album featured the singles, Bad Reputation and Do You Wanna Touch Me. The album charted at number seventeen in France and Do You Wanna Touch Me, reached the top ten in Canada and the top twenty in Australia and USA.

Jett then released her first album under the Blackhearts name in 1981. I Love Rock ‘n Roll was a great success and has sold ten million copies. The album was number one in Canada and New Zealand and reached number two in America. The title track from the album, which was a cover of the English band The Arrows’ song I Love Rock ‘n’ Roll, was a top five hit across the world and was number one in America, Canada, Australia and South Africa. The second single from the album, Crimson and Clover, also charted well reaching the top ten in a number of countries. The third single, Summertime Blues, was less successful. A second album with the Blackhearts was released in 1983. The second album, titled Album, was nowhere near as successful as the bands previous efforts and only broke into the top twenty in America and Norway.

The singles from the album, Fake Friends, The French Song and Everyday People, similarly only charted in the top 40 of a couple of countries. 1984 saw another album release for the group, Glorious Results of a Misspent Youth. The album did not enjoy chart success, but the band continued to go from strength to strength on tour. Jett and The Blackhearts went on tour with Queen, Aerosmith and The Police. They also expanded their tour beyond the usual North American locations to visit Panama and the Dominican Republic. Jett starred in the 1987 film Light of Day which also featured Michael J Fox. Jett performs the Bruce Springsteen written Light of Day song in the film. Another Blackhearts album, Good Music, was released to coincide with the release of the film.

Jett and the Blackhearts finally returned to chart success with the 1988 album, Up Your Alley, which went multi-platinum and broke into the top twenty in America and Sweden. The lead single from the album, I Hate Myself for Loving You, was a top ten hit in America and New Zealand. They followed that success with the cover album The Hit List. They released an eighth studio album, Notorious, in 1991.

In the 1990s Jett would work on producing a number of bands and would do a number of collaborations. The Blackhearts also continued to release material, Pure and simple in 1994, Naked was released only in Japan, Sinner was released in 2006, and Unvarnished was released in 2013. Jett is nicknamed the ‘Godmother of Punk’, due to her influence on and involvement in the early American punk movement. Jett has also appeared in a number of TV shows, often as herself, and in 2000 she played Columbia in a Broadway production of the Rocky Horror Show.

Joan Jett has been deeply private about her own life and has refused to comment on rumors that she is a lesbian. Jett is a vegetarian and an animal rights advocate. She also supports vegetarianism due to the effects intensive farming has on the environment. Jett was inducted into the Rock and Roll Hall of Fame in 2015 along with her band The Blackhearts.