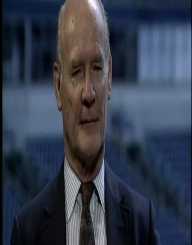 On the 11 September 1924, Thomas Wade Landry was born in Mission, Texas. His father Ron Landry was the local fire chief and an auto mechanic. Tom Landry showed an interest in football at a young age.

Tom Landry was educated at Mission High School and did brilliantly academically, as well as on the sports field. After doing one semester at the University of Texas at Austin, WWII interrupted his studies. He returned after he was discharged in 1945 and graduated with a business administration degree in 1949. He later enrolled at the University of Houston, studying mechanical engineering.

During WW II, Tom Landry joined the airforce and took part in 30 B-17 missions over Europe. He attained the rank of first lieutenant. After his discharge in 1945, he returned to the University of Texas.

Founding and legendary coach of the Dallas Cowboys.

Tom Landry played quarterback in the school team during his final year, and they did not lose a game. The score for his senior for the team was: 322-0 score and a 12-0 record. After high school, Tom Landry enrolled at the University of Texas but WWII interrupted his studies, and he left after one semester. When he returned to university, Tom Landry played fullback, quarterback and defensive back for the Longhorns. He played for the all-Southwestern Sugar Bowl in his junior year; serving as co-captain in his senior year. During this time, his team won the Orange Bowl.

After he had turned professional, Tom Landry played cornerback for the New York Yankees in the All-American Football Conference. When the team joined with the New York Giants, he continued playing for six more seasons. He made the All-Pro defensive team in 1952. Then in 1954, he was chosen to become a player-coach under Jim Lee Howell who had been appointed the head coach.

In 1955 he was appointed the team's defensive coordinator which meant that his playing days were over. His next appointment was an assistant coach (1956-1959).

Tom Landry is remembered for the 4-3 defense he developed while at the Giants. This defense became NFL standard eventually becoming the Flex. During Landy’s time as defensive coach, the Giants stats were 33-14-1, winning two Eastern Conference Division Titles and one NFL championship in 1956.

In 1960 Tom Landry was chosen as the first coach of the Dallas Cowboys. He was signed up for five years. His first year was somewhat shaky (0-11-1), and things were not overly impressive for the first few years.

The Dallas Cowboys reached the big game five times in the seventies, winning two Super Bowls:
Super Bowl VI (1971) and Super Bowl XII (1977). The Cowboys continued their success in the eighties until three losing seasons meant that Landry’s time with the Cowboys had come to an end and the Cowboys changed coaches in 1989.

In 1990, Tom Landry was inducted into the Pro Football Hall of Fame and in 1993, the Cowboys Ring of Honor.

Tom Landry and Alicia Wiggs married in 1949. They had three children together: Thomas Landry Jr., Kitty Phillips and the late Lisa Childress (d.1995).

Diagnosed with acute myelogenous leukemia in 1999, Tom Landry died the following year on the 12 February 2000. He was seventy-six years old.

One of the main highways in Dallas, Texas was renamed after Landy. There is also a nine-foot-two bronze likeness of the coach. This statue was unveiled at halftime during a game between the Dallas Cowboys and the Washington Redskins in 2001. The coach wears his fedora. The statue stands on a star-shaped pedestal at the Texas Stadium.