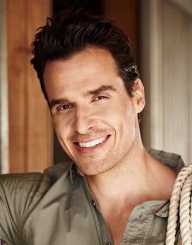 Antonio Sabato Jr. was born on February 29, 1972, in Rome, Italy. He is a charming Italian-American actor and model best known for his acting roles in ‘Melrose Place’ and ‘Charmed.’ Antonio appeared in the soap opera titled ‘General Hospital’ from 1992 to 1995 as Jagger Cates.

He also modeled for Calvin Klein posing in their underwear campaign. Sabato is also an aspiring politician and continues to nurture his political career. In 2017, he purposed to run for the United States Congress in California’s 26th district. He filed his bid to run against the sitting Democrat Congresswoman Julia Brownley.

He went to Palisades Charter High School in Los Angeles, Florida from where he received his high school diploma. His parents divorced, and his mother married again to George F. Kabouchy in 1997.

Antonio Sabato Jr. began his career as a model posing for the underwear campaign of Calvin Klein. In 1990, he featured in the music video ‘Love Will Never Do (Without You)’ by Janet Jackson.

1n 1992 he shifted to acting and appeared in the soap opera ‘General Hospital’ as Jagger Cates which premiered in 1995. He also appeared in the opera ‘Melrose Place’ and the science fiction series ‘Earth 2’. In 2003, he appeared as Pablo in ‘Testosterone’ filmed by Sonia Braga and his producers in Argentina. He also found an acting role as Dante Damiano in the soap opera ‘The Bold and the Beautiful’ from 2005 to 2006.

In 2008, he again took up the role of Jagger Cates in that year’s second season of ‘General Hospital: Night Shift.’ In 2010, he featured in the third episode of ‘Bones’ season six titled ‘The Maggots in the Meathead.’

Antonio Sabato Jr. appeared as Father Zaragosa in the television series titled ‘The League’ in 2013. He has also appeared in several other films and television reality shows including ‘But Can They Sing’ (2005), ‘My Antonio’ (2009), Celebrity Wife Swap’ (2012) and ‘Dancing with the Stars’ (2014) among others. Antonio has also served as the host of a thirty minute long home remodeling show known as ‘Fix It and Finish It’ since 2014.

Antonio Sabato Jr. ventured into politics on May 8, 2017, when he filed his bid to run for California’s 26th district congressional seat. He planned to vie on a Republican ticket against the incumbent Democrat Congresswoman Julia Brownley.

However, he lost to Julia garnering only 23.1% of the votes cast in the Primary Elections. He is still determined to run for the seat in the General Elections.

Antonio Sabato Jr. was first married for one year to Tully Jensen from 1992 to 1993. He then married Cheryl Moana Marie Nunes in 2012 but separated four years later in 2016. The couple has two children a daughter and a son although they do not live together. He has another son with Virginia Madsen. He is currently forty-six years old.