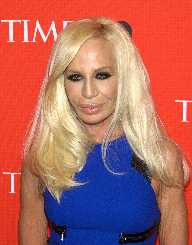 Fashion Is About Dreaming and Making Other People Dream: Donatella Versace

Italian fashion designer and the reigning Vice President and Chief Designer of the Versace Group, Donatella Francesca Versace was born on May 2, 1955, in Reggio Di Calabria, Italy. She was the youngest of the four children of her father Antonio Versace, a personal financier to the Italian aristocracy and her mother, Francesca Versace. Her elder sister Tina Versace died at the age of twelve due to an improperly treated tetanus infection. Her two older brothers Giovanni ("Gianni") and Santo Versace later founded the Versace Group, a leading fashion designer label of Italy.

Donatella Versace grew up watching her mother’s sense of fashion as a dressmaker. She was also hugely influenced by her elder brother Gianni Versace, who was a budding fashion designer during her growing years. Initially, Gianni began a knitwear design in Florence, Italy. Donatella followed her brother and decided to work in the public relations department of the clothing line. However, both Gianni and Donatella found her role as a muse and adviser to her brother most beneficial for the interest of the organization.

Donatella Versace enrolled at the University of Florence to pursue a study of foreign languages and wanted to become a teacher. However, she ended up frequently commuting between Florence and Milan to help her brother in his new fashion company established at Milan.

Having served Gianni’s fashion company in Milan as his muse and adviser during the early part of the 1970s, Donatella Versace assumed the role of the Vice President of Gianni Versace SpA, founded by her brother in Milan in 1978. She served in the post until 1997, when her brother was murdered, shot outside his home in Miami, Florida. A devastated Donatella quickly regained her composure and took over the reins of the Versace Group and became the artistic director of the company.

Gianni was battling cancer from the mid-1990s, and it was Donatella Versace, who had almost single-handedly managed the affairs of the company during the prolonged absence of her brother. Even during the initial years of Versace Group, she made outstanding contributions to the growth and development of the company by arranging many Versace fashion shows and advertising campaigns. It was she, who could effectively criticize and have her say over her brother since she was remarkably close to Gianni, who valued her input, insights and positively took her criticism.

Although it wasn't easy for Donatella Versace to take over the mantle of the Versace Group and carry forward its legacy, her familiarity with the affairs of the company and the leading role already assumed by her, assisted her immensely in reinvigorating the fortunes of the company. She mounted her first couture show for the Versace Atelier at Hotel Ritz Paris in 1998, one year and three days after the assassination of her brother. She built her runway over the swimming pool of the hotel, precisely in a similar way as her brother used to do every season, except that this time it was made of sheer glass.

Donatella Versace continued to build her fashion empire overseeing the production of a dozen collections each year with special care for her product lines like Young Versace and Versus. She started organizing her collection shows and made it an annual event with the who’s who of the celebrity world like Liz Hurley, Sir Elton John, Kate Moss, Catherine Zeta-Jones and even Prince Charles as the guest of the celebrity entourage and lavish parties associated with the event.

In 2009, in a bid to reinvent the brand Donatella Versace hired Christopher Kane to design for her collections. She collaborated with other famous designers after the departure of Kane and renovated the haute couture line of the company Atelier Versace. Giving due weight to the advertising sector, she used the images of leading fashion icons such as Madonna, Jennifer Lopez, Lady Gaga, Courtney Love, Christina Aguilera, Jonathan Rhys Meyers, January Jones, Beyoncé and Demi Moore for the promotion of the various distinguished Versace products. As of today, Versace is a leading name in the marketing of its numerous product lines including home goods, perfume, clothing, and furniture. Besides, the group operates two luxurious hotels.

Donatella Versace, a fashion icon herself, developed her signature look since her teenage days. She dyed her hair platinum blonde and used dark eyeliner. In 1995, her brother Gianni launched a Versace perfume, Blonde in her honor and gave her, her label, Versus.

She married former American model Paul Beck in 1983. They together have two children, a daughter, Allegra Versace Beck, born on 30-06-1986 and a son, Daniel Versace, born in 1989. In 2000, the couple eventually divorced.

Donatella Versace was notorious for her drug addiction particularly after the sad, sudden demise of her beloved elder brother. She was addicted to Cocaine for many years, and after a long struggle with it, she sought to treat her addiction during 2004.

Her character was imitated on the American television show Saturday Night Live by actress/comedian Maya Rudolph. Showing an impeccable sense of humor, Donatella called Rudolph to give some advice about improvisation of the caricature of her character. Actress Gina Gershon, who spoofed the role of Donatella in the ABC series ‘Ugly Betty’ in a fictional character called Fabia, also portrayed Donatella in the Lifetime television movie titled ‘House of Versace.’ Oscar-winning actress Penélope Cruz portrayed the character of Donatella in the second season of the television show American Crime Story in the episode titled ‘The Assassination of Gianni Versace.’

Donatella Versace was seen in many films mostly in some cameo appearances including the likes of ‘Zoolander’ and ‘The Devil Wears Prada.’ At the Grammy Award Ceremony in 2000, Jennifer Lopez wore a green dress designed under the direction of Donatella.