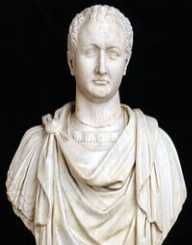 During the first century BC in Rome, a civil war was rife for several decades. This saw the fall of ‘old’ aristocracy in Rome and allowed for families that had previously been unknown, to become powerful and prominent in a short space of time. The gens Flavia was one of those families.

His great-grandfather served as a centurion under Pompey during Caesar’s civil war. This allowed him to marry into wealth, which then elevated the status of his son, Titus Flavius Sabinus I (Titus’s grandfather). Sabinus grew his wealth through his position as tax collector in Asia, and also a banker in Helvetia. He married Vespasia Polla, who had a wealthier station yet again, and this continued the elevation of his sons, Titus Flavius Sabinus II, and Vespasian, who both became a senator

In 57 – 59, Titus served in Germania and Britannia. He continued to serve in the military and was greatly renowned as a commander. When Nero died in 68, his father ascended the throne as emperor. Titus was left to finish off the Jewish rebellion they had been fighting at the time. In 70 AD Titus overran and captured Jerusalem. He destroyed the city, and as a thank you was awarded the Arch of Titus, which stands even now, in modern times, to remember his victory.

Titus took over as emperor in 79AD, upon the death of his father. His most famous work was the completion of the Colosseum, which still stands today.

Titus is also well remembered for his generosity. There were two great disasters in his time, and only a year apart. In 79, Mount Vesuvius erupted, and in 80, there was a fire in Rome. Both caused massive chaos and death, and Titus looked after his people in both instances.

After only two years as emperor, Titus died in 81. He was succeeded by his younger brother, Domitian, and deified by the Roman Senate, on the orders of his brother.

Titus married Arrecina Tertulla in 62 AD. She died in 63 AD. She was the daughter of a senior official retired from the Praetorian Guard.

He then married Marcia Furnilla in 63 AD, who was from a family with far more nobility. He ended up divorcing her in 65 AD and never remarried.

Titus had several daughters, and at least one of them was with his second wife, Furnilla. The only daughter known to have lived through to adulthood was Julia Flavia.

There are preserved statues of Titus in all the famous museums of the world, including the British Museum, the Louvre in Paris, and the Vatican Museum.

The two most notable monuments, though, are the Colosseum, and the Arch of Titus.

Records indicate he was a well-loved emperor who looked after his people, albeit only for a short while.