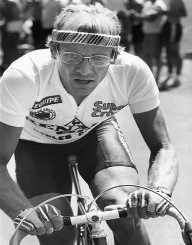 Laurent Patrick Fignon, a French professional road bicycle racer, was born on August 12, 1960, in Montmartre, Paris, France. His family relocated to Tournan-en-Brie in 1963, and he was raised there for the next 20 years. He shifted to Paris again at the age of 23.

As a young boy, Laurent Fignon loved playing football and represented his area in the sport. His friends backed him to participate in cycle racing competition which he eventually did in 1976, and he won his first official cycling competition. His parents were not in favor of his involvement in cycling, and therefore, he initially participated in cycling competitions without the knowledge of his parents. He went on to win four more races in his first year, only one in the second year and 18 out of 36 races in his third year in the sport. Though his parents allowed him to pursue the sport after having seen his prowess in cycling, they expected him to study as well.

Laurent Fignon enrolled at the University of Villetaneuse to study Structural and Materials Science. However, he was an unwilling and indifferent student and left the University to join the army. He was posted at the Bataillon de Joinville, well-known for its encouraging sporting infrastructure and reputation of being a big sponsor of sporting activities. Laurent found a congenial, comfortable and supportive environment in his Battalion and decided to pursue a professional career in cycling.

In 1981, Laurent Fignon took part in the Tour of Corsica, where amateur cyclists were allowed to ride along with the professional ones. Laurent gave a fierce competition to the top professional cyclist of the circuit Bernard Hinault early in the race and successfully competed with him for the most part of the race. A few days later he was spotted by Cyrille Guimard during a national 100 kilometer team time trial. He was offered a place in Guimard’s Renault-Elf-Gitane professional team from the next year. In 1982, at the age of 21, Laurent joined the team along with his longtime compatriot and fellow junior rider Pascal Jules.

Laurent Fignon, in his first professional season, participated in the 1982 Giro d'Italia. He broke away in the second stage and became the leader of the race. Though he lost the lead in the next stage and could finish the race only at the fifteenth position, he got to wear the pink leader’s jersey for one day for his lead in the second stage. His exploits on the mountainous stretches of the Giro d’Italia earned him the confidence of his teammate, top professional cyclist Bernard Hinault who became his most trusted teammate in the mountains. He participated in the Paris Tours in his first year. However, during a crucial break, his crank broke. He succeeded in winning the Critérium National in his first year as a professional cyclist.

In 1983, Laurent Fignon participated in 1983 Vuelta a España and helped his leader Hinault win the tour. 1983 Tour de France was to follow Vuelta a España and Guimard was not keen to send Laurent to the Tour as he felt that two back-to-back grand tours could be too much taxing for a 22-year-old rider. However, as luck would have it, four-time champion Bernard Hinault declared himself unavailable for a start due to injury. In Hinault’s absence, the Renault team was without a leader.

Guimard added Laurent Fignon to the Renault team for competing in the 1983 Tour de France. His strategy was to go for stage wins and placed his expectation on either Laurent or Marc Madiot to go for the best debutant category. The first mountain stage started during the stage nine, and Laurent found himself in the second place behind Pascal Simon. In spite of crashing and breaking his shoulder blade, Pascal Simon continued and gave some tough time to Laurent.

However, at the fifteenth stage, which was a mountain time trial, Laurent Fignon recovered remarkably well and came within one minute of Simon. Finally, at the seventeenth stage, Simon had to concede defeat and Laurent became the new leader. In the stages that followed, Laurent became invincible; winning even the time trial on the 21st stage. At the age of 22, he won the 1983 Tour de France thus becoming the youngest participant to win the event since 1933.

In 1984, Hinault was hired by the new La Vie Claire team. In his absence, Laurent Fignon was entrusted with the role of team leader of the Renault team. In the 1984 Giro d’Italia, Laurent ended the race in the second position behind Italian Francesco Moser but under controversial circumstances. Reportedly, Moser emerged the winner due to the undue favor extended by the organizers.

In the 1984 Tour de France, a prestigious battle ensued between Laurent and his former team leader Hinault. Laurent Fignon won the race for the second time in a row with a ten minute margin after winning three of the five-time trials. He missed the 1985 season due to injury. In the 1986 season, Laurent took part in the Tour de France but was unable to make it to the final.

However, Laurent Fignon was able to win the La Flèche Wallonne during that season. He came back strongly in 1987, became third in 1987 Vuelta a España and seventh in Tour de France. He won the Milan–San Remo, the annual cycling race between Milan and Sanremo in 1988 and did not participate in the Tour de France. He participated in the 1989 Tour de France and lost the race by a margin of 8 seconds, the smallest ever margin of victory in the history of the event.

Laurent Fignon was diagnosed with metastatic cancer in April 2009. Fignon admitted that he had taken recreational drugs amphetamines and cortisone during the initial period of his career, but he refused to believe that his cancer was a result of consuming those drugs. He was rushed to the Pitié-Salpêtrière hospital while working as a commentator for the Tour de France in August 2010. He died at the hospital on August 31, 2010, at the age of 50. He was cremated at the Père Lachaise cemetery on 3rd September 2010. He was survived by his wife Valerie, both his parents and his children Jeremy and Tiphaine from his first marriage.