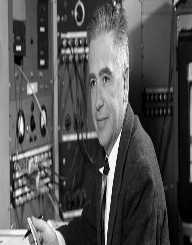 Emilio Gino Segrè was one of the two Nobel Prize winners for Physics in 1959, for the discovery of antiproton. He was a physicist who also headed the Manhattan Project.

Emilio Gino Segrè was born on 1st of February 1905, in Tivoli, Rome. He was the youngest son born to Giuseppe Segrè and Amelia Susanna Treves. His two older brothers were Angelo and Marco. Emilio Gino Segrè and his brother attended the local school in Tivoli until the family moved to Rome in 1917. There, Emilio continued his education until he graduated from the Liceo in Rome during 1922. At the same time, he was guided by his uncle, Claudio Segrè, a mining engineer who taught him mathematics and physics.

Emilio Gino Segrè was an engineering student at the University of Rome: a Sapienza in 1992 but later changed to physics in 1927. He studied for his doctorate in 1928, under the guidance of Professor Enrico Fermi. His education was briefly on hold when he served in the Italian army in 1928 for a year.

After retiring from the army in 1929, Emilio Gino Segrè returned to the University of Rome as an assistant to Professor Corbino. He published his first two research papers with Edoardo Amaldi, first On anomalous dispersion in mercury and lithium and later on the Raman Effect. In 1930, he was invited by Professor Pieter Zeeman to finish his research on the Zeeman Effect on certain alkaline metals in Amsterdam. In the same year, Emilio received a Rockefeller Foundation Fellowship to work with Professor Otto Stern in Germany on the advice of his tutor Fermi.

When Emilio Gino Segrè returned to Italy two years later, Emilio was made Assistant Professor at the University of Rome, still working with his mentor Professor Fermi. His group famously became the Via Panisperna boys, the group that had discovered slow neutrons, which was the basis of the atomic bomb. Emilio moved to the University of Palermo, becoming the Director of Physics Laboratories. It was there that he continued his research in radioactivity. In 1938, his short trip to Berkeley, California turned into long-term stay when Mussolini made it illegal for Jews to have University positions.

Emilio Gino Segrè became a research associate in the Berkeley Radiation Laboratory at very low pay. There, Emilio found a metastable isotope which is used in nuclear medicine today. As the war began to brew in 1941, physicists were recruited for war efforts, so Emilio became a lecturer in the Physics Department. By late 1942, he was invited by Oppenheimer to be the head of the Radioactivity Group for the Manhattan Project in Los Alamos Laboratory. Emilio was given a new identity of Earl Seaman for security purposes. In 1943 he settled in Los Alamos with his family, becoming naturalized citizens. Emilio and his team were tasked to measure the radioactivity of various fission products that were found in various sites. They were also responsible for determining the degree of isotope enrichment.

Emilio Gino Segrè received several offers from Universities around 1945, but he accepted a full professorship and returned to University of California in Berkeley. Due to deteriorating relationships and court battles, Emilio Segrè moved onto the University of Illinois at Urbana Champaign, and then he returned in 1952. There, he discovered the antiproton. Emilio became the chairman of the Physics Department from 1965 for a year. After he retired from University of California in 1972, as he had reached the compulsory retirement age of sixty- seven.

Emilio Gino Segrè moved to University of Rome to teach another year in 1974. He retired in 1975 after he reached Italy’s compulsory retirement age.

Emilio Gino Segrè met Elfriede Spiro in 1934, Elfriede was from West Prussia. The couple married in 1936 in  Great Synagogue of Rome. They have three children together: Claudio, Amelia, and Fausta. After Elfriede died in 1970, Emilio married Rosa Mines in February 1972.

Emilio Segrè suffered a heart attack and passed away on 22 April 1989 in Lafayette. He was buried in the Lafayette Cemetery

Emilio Gino Segrè received the Hofmann Medal of the German Chemical Society, as well as the Cannizzaro Medal of the Italian Accademia dei Lincei. He was jointly awarded Nobel Prize in Physics with Owen Chamberlains in 1959.