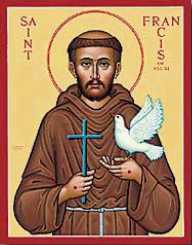 Saint Francis of Assisi was born in late 1181 or early 1182 in Assisi, duchy of Spoleto, Umbria, Italy. He was among the seven children of Pietro di Bernardone, a wealthy silk merchant, and Pica de Bourlemont. His mother immediately had him baptized upon his birth as Giovanni di Pietro di Bernardone as his father was on a business tour during the period of his birth. When Pietro returned from his trip, he became angry and unhappy about the baptizing and naming of his son. Pietro was a French Man and had an obsession with everything French. He canceled his son’s Italian name and renamed him Francesco (The Frenchman).

Pietro wanted his son to be a man of great commercial success like him and possess the infatuation he had with everything French. Accordingly, Francesco grew up in luxury, living a high-spirited life synonymous with a typical wealthy, spoilt young man. Francesco’s love for French songs, poems, and all French related aspects reflected his father’s desire to make him a French Aristocrat. In his privileged surroundings, Francesco learned horse riding, archery, and wrestling in addition to his massive indulgence about partying with free-flowing wines, food and wild celebrations.

Francesco abandoned school at the age of 14 and became infamous for his wayward lifestyle where he often broke the rules and regulations imposed by the city administration. However, the prospect of engaging himself in their family cloth business for life made him even more rebellious. He had a fascination with the medieval action heroes popularly known as Knights. He wanted to be a war hero like them and developed a strong ambition of becoming a future Knight. As luck would have it, a war broke out between Assisi and its long-time enemy, the neighbouring town of Perugia.

Francesco joined the cavalry with eager anticipation. They came under heavy opposition attack. Most of the Assisi army was killed; some fled. But people like Francesco were spared and were taken as a hostage for demanding a huge ransom for their release. Francesco was kept inside a damp underground cell for around a year in woeful circumstances waiting for his father’s ransom money to arrive. It is reported that during his stay in captivity in the harsh, dank dungeon, Francesco believed to have received visions from God though in another version he might have contracted a severe and unknown disease during that period.

It was in 1202 when the war broke out. Francesco was released from the captivity in 1203, after around a year-long negotiation and payment of ransom. Initially, he was the same jovial person leading the carefree life as he was used to before his confinement. But gradually his behavioral pattern changed. He focused his attention towards God and enlightenment, often leading a solitary existence. He started spending time in remote mountainous locations as well as in old, quiet churches meditating and seeking answers from the divine power. His change of heart also led him to pursue a life of austerity.

Francesco went on a pilgrimage tour of Rome. Later, he revealed that he had a mystical vision of Jesus Christ while praying before an old Byzantine Crucifix at the Church of San Damiano. According to his account, he had been asked by Christ to save the ruined churches and live a life of absolute deprivation.

Francesco began his quest in earnest. He started propagating Christianity in and around Assisi. Soon a flock of 12 devotees gathered around him and became his faithful followers. There was two type of rumors floating in the air. In the first one, Francesco was considered as a madman or a fool struck by a mysterious illness. In the other theory, he was being seen as a revered man almost like an incarnation of Jesus Christ himself who had arrived on earth for a noble cause of rescuing the humanity of all its miseries.

His elite father was not at all happy with all the proceedings going on around him and was very keen to bring his son back on the trusted and trudged track. Francesco had to desert his father and deny his paternal rights to become free from his clutches. He declared that God is his only father. For the next two years, he almost spent the life of a beggar. With a missionary zeal, he started preaching in villages in and around Assisi. His central theme of preaching was repentance. He came back to Assisi after two years and began rebuilding and repairing old churches of the region.

The sermon about Matthew 10:9 motivated him to repudiate every carnal pleasure and embrace a life of extreme poverty. With his dedicated followers of 12 disciples, Francesco formed a new religious order which was referred to as ‘Lesser Brothers.’ It was not until 1209, this new religious group was recognized and given the status of a new religious order, when he along with his followers reached Rome after a long and arduous journey through the countryside of mountainous districts of Umbria, preaching and singing hymns cheerfully all along. The Pope granted them an informal sanction on the condition that the group will be officially recognized with its increase in membership.

After the recognition, the group started growing. On April 16, 1210, the group constituted the official founding of the Franciscan Order. Still known as the lesser brothers, the religious order had a new identity and became known as the Order of Friars Minor. They initially were centered around Porziuncola and its little chapel of St. Mary of the Angels. Gradually, they expanded throughout Italy and became a cult religious order.

Francesco developed certain wounds visible to the naked eye resembling the injuries Jesus Christ suffered during his crucifixion. These wounds were referred to as holy wounds of stigmata, though some people believe that the scars were symptoms of Leprosy which he contracted while nursing leprosy patients. However, his health began deteriorating rapidly. By that time, he was regarded as a saint in the making. Knights were sent to protect his body as it was the common belief that the body of a saint is an utmost precious relic and would bring glory to the town where it rested.

On October 3, 1226, Francis of Assisi left for his heavenly abode. The end came at the age of 44. He was posthumously declared as Saint two years after his death by Pope Gregory IX on July 16, 1228.