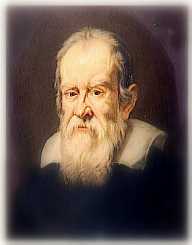 In 1564, Galileo Galilei was born in Pisa. He was the eldest of seven children. His father Vincenzo Galilei was a scholar as well as a gifted musician. The Galilei’s were a distinguished Florentine family. His mother was Giulia Ammannati of Pescia. The family settled in Pisa. Galileo’s brother Michael was a musician. Two sisters, Virginia and Livia, married and remain in Florence. There are no official records of his other siblings, only their birth records.

Galileo's first tutor was Jacopo Borghini in Pisa. Then when the family returned to Florence in 1575, Galileo was sent to the monastery of Santa Maria in Vallombrosa to be educated. In 1758, he became a novice; but his father disapproved. Instead, his father applied unsuccessfully for a scholarship for his son to the University of Pisa, Galileo, therefore, returned to the monastery and finished his schooling there. In 1551, he enrolled as a medical student at the University of Pisa.

While studying medicine, Galileo Galilei found himself drawn to mathematics. By 1553, he was tutored in math by Ostilio Ricci, a friend of his father. He made outstanding progress with his pursuit of mathematics, and in 1585, Galileo abandoned his medical studies. He went back to Florence and concentrated on studying Archimedes and Euclid.

In 1589, Galileo awarded the chair of mathematics at the University of Pisa. During his tenure, he was working on his famous De Motu. These findings were the beginning of his argument against Aristotelian physics. Three years later, he moved to the University of Padua and continued his work.

In the 1600s the first optical telescope was invented. Galileo Galilei did not create it, but he was the first to use it to study the night sky and record what he discovered. Based on early Dutch designs, Galileo built a telescope in 1609. In January 1610, he announced that he had seen four objects orbiting Jupiter. He published his findings, in Sidereus Nuncius (The Starry Messenger), which offered observations on the stars in the Milky Way as well as comments about rough surfaces on the moon. Galileo called Jupiter’s moons after the famous Medici family: Medician Stars. Cosimo II subsequently made him philosopher and mathematics to the Medici family.

Galileo Galilei discovered that the surface of the moon was rough, with various depressions. He noted that there appeared to be mountains and valleys, much like the earth. He calculated the heights of these mountains by using geometry. According to Aristotelian thinking, the moon was a heavenly, perfect body.

Close observation of Jupiter revealed four objects, and Galileo identified these as moons orbiting around the planet. This finding questioned the Ptolemaic model, being the first time that objects had been seen orbiting a planet other than earth. These four moons are today known as the Galilean satellites.

The Phases of Venus

Galileo Galilei observed that the planet Venus went through a sequence of phases, similar to the Moon.

Galileo Galilei was one of some astronomers to observe sunspots. There was a debate between astronomers of the day as to whether these spots were surfaces on the Su or satellites. Galileo supported the sunspot argument. Again, this observation that went against the Aristotelian perfect cosmos theory.

Galileo observed two appendages on Saturn that appeared, then disappeared. These were identified by a Dutch scientist as the rings around Saturn.

Stars in the Milky Way

Galileo Galilei observed that through a telescope stars appeared as points of light and he worked out that it was because of their distance from Earth. His found the Milky Way and realized that it contained thousands of unseen stars which caused him to ask why there were so many invisible objects in the night sky.

Scientists and theologians of the day were quick to point out that Galileo’s Jupiter’s moon theory contradicted the geocentric Ptolemaic model of the universe. Galileo’s findings supported the heliocentric model, which Copernicus first proposed in 1543. In 1616, Nicholas Copernicus book De Revolutionibus was placed on a banned list by the Vatican. (It remained prohibited by the church until 1815). The pope called Galileo to the Vatican and advised that he was no longer allowed to support Copernicus.

Galileo Galilei presented both sides of the heliocentrism debate in 1632. The following year, in 1633 he had to appear before the Roman Inquisition. He was accused of advocating heliocentrism. Under threats of torture and accusations of heresy, Galileo was forced to withdraw his support for heliocentrism. He was placed under house arrest and spent his final years writing a complete summary of his motion experiments.

After the publication of his final work, Galileo lived for four more years and died at Arcetri in 1642. He was 78 years of age. Vincenzio Viviani published an account of Galileo’s life in 1654.

The Catholic Church accused Galileo Galilei advocating heliocentrism. He had to appear before the Inquisition. The Vatican issued a formal statement at the Pontifical Academy of Sciences which said that the Pope had closed a thirteen-year investigation into Galileo’s condemnation in 1633.

In 1999, a formal statement at the Pontifical Academy of Sciences on Saturday, Vatican officials said the Pope had closed 13-year investigation into the Church's condemnation of Galileo in 1633. The Church subsequently issued a formal apology.