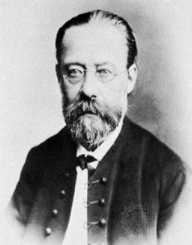 Bedrich Smetana is a music composer like no other in the Czech Republic, often referred to as the Father of Czech Music in his hometown.At the age of six, Smetana gave his first public performance.

Bedrich founded the Czech National School of Music and later became the Conductor of the Provisional Theater. Some of the songs he composed are “The Brandenburger, Prodana Neverta (The Bartered Bride), The Freedom to Words.”

Bedrich was born in 1824 in Litomvsi, east of Prague to Frantisek Smetana who was a poor brewer. Bedrich was the third child and the first son of his father, and he has seven sisters as an adult. The Smetana‘s are originally from Hradec Craiova region of Bohemia Czech. Bedrich found his love for music at an early age. His father tried to get him to apply himself in academics, but Bedrich was too focused on music to be a student.Smetana lived with his older cousin Josef Smetana who was a teacher and offered to see that Bedrich stayed focus on his studies.

Bedrich remained with his cousin until he completed his school in 1843. Bedrich became a skilled pianist and had a lovely romantic time with his admirers. One of the most important of them all is Katerina Kolalova whom he had known briefly as a child. Bedrich wrote several poems and song for her. He was once quoted to have said that “when am not with her I am sitting on hot coal and have no peace.

In 1843 Smetana’s father finally allowed him to follow his passion as a composer but by then his father’s wealth has diminished. Bedrich found it difficult to pay his tuition fees in the music school. In his quest for a life as a musician, Katrina’s mother introduced him to Josef Proksch who was also Katrina’s teacher, and he agreed to accept him as his student in 1844.

Bedrich was penniless; it was not long that he got a job as a music teacher to a nobleman by name Count Leopold Thun. In 1848, after Bedrich has quit working for the Thun’s, he recommended Katrina as his replacement while he went on a tour. In the same year, Bedrich opened a music school with the help of Fran Liszt. The school struggled for sometime before it he gained balance.

In 1849, Bedrich married Katrina and relocated the institute to Katrina’shometown where he was able to attract dignitaries from different works of life.In one of his concert at the school, the Austrian Emperor Ferdinand visited, and this gave him a huge recognition.

The presence of the Austrian Emperor made Smetana fairly known. Smetana developed himself more in composition. In 1850 after his marriage Smetana was financially average, he accepted the post of Court Pianist given to him by the emperor in Prague Castle, while he still taught in his institute. In1861, two years after the death of his wife Katrina, Smetana got information that the Provisional Theater of Czech will be built in Prague. He tried to take advantage of it to stage an opera that reflected Czech national character. But this failed because the conservational fraction in charge of the project considered Smetana’s work to be “dangerous modernist’.

In 1863, Bedrich was elected President of the music section of UmeleckaBeseda, a society for Czech artist. In 1864, Bedrich conducted Berlioz's choral symphony Romeo et Juliette at a concert of Shakespeare’s tercentenary.  Smetana when on to compose his “Brandenburger” in Bohemia which turned out to be a huge success. Later that same year, Bedrich his next opera, which later became the most popular of his works. However this time it was not successful.

In 1866, Bedrich became the conductor of the Provisional Theater. Smetana kept on working, and in 1874 he has a hit with his work titled “The Two Widows.”

In 1863 he was made the Chorus Master of the Nationalist Hiahol Choral Society, and in March of that same year, he was made the President of the music section of Society of Czech Artist. Bedrich was appointed as the music critic for the Czech language newspaper.

In1926, after Smetana’s death, a Smetana Museum was founded in Charles University’s Institute for music.

Bedrich was the first son of his father, and he had seven sisters. He got married to his friend and classmate Katrina. They had five girls between 1851 1855.

In 1854, he lost his second daughter Gabriela to tuberculosis.After one year his eldest daughter died of scarlet fever. Bedrich experienced sorrow, in 1856 he lost his fourth daughter and his wife was diagnosed with Tuberculosis. Katrina’s health grew worst, and she died in 1859.

Bedrich became partially deaf in his right ear in 1874, and he resigned his appointment from the theater. In 1879 Smetana became scared that he is going mad and was experiencing serious depression and he died on May 12, 1884.