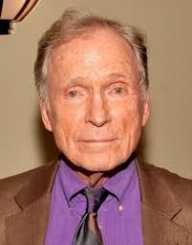 American comedian, talk-show host and television personality Dick Cavett was born Richard Alva Cavett on the 19 November 1936 in Gibbon, Nebraska to Alva Cavett and Erabel Richards. Both his parents were educationalists. Cavett’s mother died of cancer when he was ten years old, and his father later married Dorcas Deland.

Dick Cavett graduated from Lincoln High School. During his time at high school, he was the state president of the student council. He enrolled at Yale University where he studied English and drama, taking part in college drama productions.

From 1959, Dick Cavett lived in New York City doing various jobs to support himself. He acted as an extra on The Phil Silvers Show: Bilko’s Godson (1959) which was his first appearance on television. He also worked as a copyboy at Time Magazine as well as a store detective. Around this time, he came into contact with Jack Paar, the host of The Tonight Show. Cavett supplied Paar with jokes and one-liners which led to a position as a talent coordinator on The Tonight Show. His first appearance on the show was in 1961.

Dick Cavett developed into a crucial team member on the Tonight Show, writing jokes for Paar, Johnny Carson and at times, Groucho Marx when he occasionally hosted the show. He became friendly with Marx and also and became friends with Woody Allen. In the mid-1960s, Cavett began performing stand-up comedy at gigs in New York City.

As an actor, Dick Cavett has appeared in numerous television productions and films including Woody Allen’s Annie Hall (1977) and Forrest Gump (1994).

Cavett also received numerous Primetime Emmy nominations over the years including a nomination in 2010 for an Outstanding Variety Special for Mel Brooks and Dick Cavett Together Again (2011). In 1991, Cavett was inducted into the Nebraska Broadcasters Association Hall of Fame.

Dick Cavett's first wife was the American actress Carolyn Nye McGeoy. The couple met when they were both students at Yale University and married on the 4 June 1964.  They had no children and remained married until McGeoy’s death from lung cancer in 2006. The couple owned Tick Hall in Montauk which was designed by Stanford White. After the house was destroyed by fire in 1997, they rebuilt a replica of the house. In 2003, a documentary film From the Ashes: The Life and Times of Tick Hall was made. Tick Hall was listed on the property market for US$62 million in 2017.

Dick Cavett talks openly about suffering from depression. He has said in interviews that he began struggling with depression in his freshman year at Yale. He was treated for depression. Later, when he started having manic episodes as well, he was diagnosed with bipolar disorder.