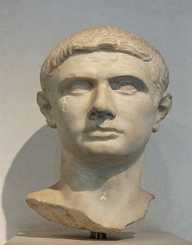 Marcus Junius Brutus was a Roman politician who took part in the assassination of Julius Caesar.

Marcus Junius Brutus Minor was born in the Roman Republic in 85 BC. His father, Marcus Junius Brutus Major, was murdered by Pompey the Great. His mother, Servilia, was the half-sister of Cato the Younger and the mistress of Julius Caesar. After his father’s death, Brutus was adopted by his uncle, Quintus Servilius Caepio.

Brutus began his career as an assistant to his uncle Cato, who was the governor of Cyprus. He also started lending money at high interest. In 53 BC, he became the quaestor of Cilicia. He then returned to Rome and joined politics. He sided with the Optimates, the conservative faction of the Roman Senate. In 49 BC, he took part in The Great Roman Civil War. After the Battle of Pharsalus, he surrendered himself to the opposing army. Caesar forgave him and set him free. The two of them became quite close. Because of the affair he had with his mother, Caesar thought that Brutus might be his biological son. In 46 BC, Brutus became the governor of Gaul. The next year, he received the title of Praetor.

Many Roman senators started to fear Caesar’s growing power. So, they conspired to kill him. They managed to persuade Brutus to join the conspiracy. On March 15, 44 BC, Caesar entered the Roman Senate. He was stabbed to death by several attackers, including Brutus. After the event, the Senate decided to pass amnesty to the killers. Still, the population was in an uproar. Brutus decided to go into hiding in Crete.

In 43 BC, consul Octavian decided to avenge Caesar’s death. The following year, he started the Liberators’ civil war. The forces of Octavian and Mark Antony fought against the forces of Brutus and Gaius Cassius Longinus. Brutus was ultimately defeated after the Battle of Philippi. He committed suicide on October 23, 42 BC. He was 43 years old. He was cremated and his ashes were given to his mother.

Brutus’ first wife was named Claudia Pulchra. In 45 BC, he divorced her and married his cousin, Porcia Catonis. They had a son who died at a very young age.

Dante classified Brutus as the worst type of sinner in his poem Inferno. Shakespeare’s play Julius Caesar features Caesar saying “Et tu, Brute?”, meaning “You too, Brutus?”. The phrase became famous as a symbol of betrayal. The character of Brutus is part of the novels The Ides of March and Masters of Rome. He is also part of the film Brutus and the TV show Rome. He is referenced in the titles of two songs by The Hives and by the Red Hot Chili Peppers. He is featured in the video game Assassin’s Creed: Brotherhood and in the Asterix comics. Brutus reportedly inspired John Wilkes Booth, the man who assassinated President Lincoln.