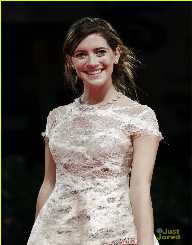 Clara Alonso is a glamorous and self-motivated fashion model in Spain who sought the biggest brands in the fashion industry at an early age. Being a celebrated model, she has worked with diversified international fashion magazines, modeled in esteemed fashion houses and has featured in several editorials.

Alonso was born on September 21, 1987, in Spain. Her mother is a pediatrician as well as a pulmonary specialist while her father was an engineer. She is the eldest of two brothers Agustina and Ignacio. At the age of 8 years they moved to Buenos Aires from Capitan Bermudez she participated in swimming, dancing, and gymnastics, volleyball and participated in field hockey.

For her basic education, Alonso attended primary school at Cayetano Errico a school in Capitan Bermudez and studied in "Instituto Inmaculada de Castelar" high school in Buenos Aires.  When she was just eight years, she dropped field hockey, and her parents put her through music comedy classes at an acting school in the vicinity of Haedo, Buenos Aires. She participated in the play “Alice in the Wonderland” which took place in Astral Theater.

In 2007, she attended castings held for "High School Musical" and was chosen to participate in the competition. This reality competition was later broadcast on Disney Channel. Although she was not chosen for the casting, she was selected to be on the concert tour which ran throughout Argentina. Fortunately, she was later she got a film role and played the character "Clari" in an Argentina movie version of "High School Musical."

During the tour, they stopped in La Rioja, Argentina and performed. Consequently, Latin American producers in the Disney Channel were attracted by Clara Alonso and later cast her in "Zapping Zone" as a hostess. This was a youth-targeted entertainment show in Argentina focusing on celebrities. She got the opportunity to host the program together with Carolina Ibarra and Daniel Martins. The show was a success, and therefore, the broadcast was spread to other states in South America.

Alonso joined the "The Cyclone" a green team composed of international Disney stars led by Captain David Henrie. This program aired from September 5 in Latin America and ended on October 3, 2003. Their team scored 55points and finished third overall.

October 21, 2008, marked her music debut where she launched her single “A mi al rede dor" partnered with Sophie Oliver Sanchez. This film was aired on Disney Channel all over Latin America. She stared in "Highway: Rodando la Aventura" mini-series which emerged as Disney's Channel fourth original production in Latin America. This series involves eight friends on a motorhome where she played the role of cleanliness and order perfectionist.

In Milan, Italy she was cast in the film " Angie le Ricette di Violetta.” It was in April 2014, when she traveled to attend to this venture. A successful debut of the film took place on June 9, 2014. She finished the third and final season production of Violetta in late November 2014 in Buenos Aires.

After eight years, Alonso left Disney to shoot a short film “Jazmin de Invierno." It was her first Spanish post-Disney film and was later premiered in July 2015. Clara Alonso also featured in yet another Spanish film, "Lontana da me" which was later streamed on Rai 1's website on November 17, 2015.

In September the same year, she shot a continuation of “Violetta" in the film "Tini, el Gran Cambio de Violetta" a TV series. Although “Violetta” was filmed in different places such as Cadiz Spain, Madrid, Buenos Aires, in Taormina, Italy it began in Sicily in October 2015.

Alonso speaks Italian and English. It was in 2013 that she started learning Italian with the intention of working in Italy. She dated Spanish Diego Dominguez (2014) and co-starred with him in “Violetta.” She is both an Italian and Argentinian citizen.