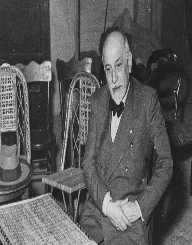 Luigi Pirandello was a writer, novelist, poet, and dramatist from Italy. Luigi Pirandello won the Nobel Prize for literature in 1934  `for his bold and ingenious revival of dramatic and scenic art.’ Luigi was a very prolific writer and his work consist of many short stories, novels, and plays and wrote some of them in Sicilian. Pirandello came up with the notion referred to as `Theatre within the theatre’ which was used during a play called `Sei personaggi in cerca d’autore.’

The notion gained Luigi a lot of fame in the drama department because it was a legendary innovation. Loving writing from a tender age, Luigi published his first book in the 1890’s and went ahead to become one of the most renowned writers of all time.

Luigi Pirandello was born on 28th June 1867 in a suburb of Agrigento, Sicily, Italy. Luigi's parents were Stefano Pirandello and Caterina Ricci Gramitto. Stefano was from a relatively wealthy family who owned various businesses in the Sulphur industry and was able to sustain a rich life for the family. Also, his mother was from a family of similar wealth status.

Luigi Pirandello began his early education at home. At the time Luigi was exited by legends and fables. Also, he started to love reading and writing, and by the time he was 12, Luigi could write significant work. Later when Luigi joined high school, he could compose poems and often read insatiably. During this time, Luigi Pirandello learned that his father had extramarital affairs and their relationship became labored. However, he got over it, and in 1886,  began working at the sulfur mines alongside his father.

Luigi felt the need to pursue his education further. Hence, he joined the University of Palermo and later switched to the University of Rome. However, Luigi departed after a brief while because of misunderstandings with one of the tutors.

Luigi then moved to Bonin and was able to settle and gain a lot of reflective learning experiences. Luigi later attained his doctorate in 1891 and his thesis was titled `Sounds and developments of sounds in the speech of Craperallis.’

Luigi Pirandello after his Ph.D. studies returned  to Rome. While there, he associated with many writers and journalists like Luigi Capuano and Tomaso Gnoli. Luigi's friends noticed his excellent writing skills and encouraged him to write. As a result, Luigi came up with `Marta Ajala,’ his first writing work in 1893. From then, Luigi Pirandello became an active writer, and in 1994, he wrote and published a series of short stories called `Amori sensza Amore. Also, Luigi wrote for various magazines and newspapers.

In 1897, Luigi Pirandello employed at `Insttuto superior di Magistero di Roma’ as a professor of .’ the Italian language. In association with Ugo Feres and Italo Fablo, Luigi came up with the weekly `Ariel.’ He used the `Ariel’ to publish his first one-act play called `L’Epilogo.’ By 1900, Luigi Pirandello had become a well known and established writer and was mostly known for his short stories and novellas. He also wrote for various newspapers and magazines. 1903 was quite a challenging year for him.

Luigi Pirandello's family encountered a large financial loss, and his wife suffered from mental complications. As a result, he had to help restore the family’s financial position and care for his wife. In the preceding years, Luigi stabilized his finances but still faced various personal problems, within the family. At this time, he came up with the `I Vecchi el Giovani’ series and released its first episode in 1909, but it was unveiled as a novel in 1913.
During the world war, Luigi Pirandello mostly wrote plays. He wrote a lot of them and soon gained recognition and respect as a dramatist, and by 1920, he was very famous. Examples of his best plays are `Enrico IV and `Six characters in search of an author.’ Luigi befriended a powerful politician called Mussolini, who supported him and enabled him to focus more on his artistic profession. Hence, Luigi was able to gain ownership of the `Teatro d’Arte di Roma.’ However, it faced a lot of financial difficulties and had to be closed in 1928.

Luigi Pirandello was the recipient of the 1934 Nobel Prize in Literature courtesy of his work `for his bold and ingenious revival of dramatic and scenic art.’

Initially, Luigi Pirandello married his Cousin called Lina after resistance from his family. However, the marriage did not last for long and was called off. Luigi later married Antoinette Portulano after an arranged marriage. They had three children together, but in 1903, Antoinette became very sick of mental complications. He took care of her until 1919 when he admitted her to an asylum.

Luigi Pirandello died at his residence on 10th December 1936. He was aged 69.