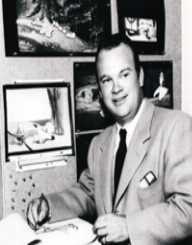 Frederick Bean "Tex" Avery was born 26th February 1908, to George and Mary Avery. He was born in Taylor, Texas, in the United States. Avery grew up in Texas, with the nicknames “Tex,” “Fred,” and “Texas.”

He studied at North Dallas High School, and he graduated in 1926.

Tex Avery took a summer course at Chicago Art Institute, thinking that he would like to become a cartoonist for a newspaper.

Tex Avery moved to Los Angeles at the start of 1928, and he spent his first few months there working in odd jobs to pay the bills. He found work as an inker at Winkler studio, which was the start of his animation career. He worked on inking cells for the short film series called Oswald the Lucky Rabbit.

Avery’s next role was with Universal Studio Cartoons, which would later become Walter Lantz Productions. He began his employment as an inker but quickly moved up the ladder. By 1930, Avery received a promotion to the position of an animator. From 1931 to 1935, he worked predominantly on the Oswald the Lucky Rabbit cartoons.

Tex Avery had an accident at work when a paper clip hit him in his left eye, causing him to lose his sight, but it didn’t stop his creativity. He worked under Bill Nolan, who continually delegated work to Avery, comfortable that he could give minimal instructions, and Avery was able to get the job done. He grew restless with the salary he was getting, and began to produce work that wasn’t up to par. In April 1935, Universal Studios let him go.

Later that year, Avery applied for work at Leon Schlesinger Productions, which would then become known as Warner Bros. Cartoons. He bluffed his way into the position and was hired as a director. He had four animators that reported to him, and they worked on the black and white Looney Tunes cartoons as opposed to the Technicolor Merrie Melodies.

Tex Avery and his animators took over the leadership role of animated short films from The Walt Disney Studio. They created many cartoon characters, that are still known and loved today, such as Bugs Bunny, Daffy Duck, and Elmer Fudd. When he was experimenting with Bugs Bunny, he used the famous, “What’s up, doc?” line, which was an instant hit with audiences and stuck with Bugs Bunny as his famous line throughout all his cartoons.

Late in 1941, Avery argued with the producer, and his time at Schlesinger studio was finished. He worked at Paramount Pictures for a short time and then went to Metro-Goldwyn-Mayer in 1942. Avery worked in the cartoon division of MGM and reached his peak creatively during his time there.

Tex Avery worked in color instead of black and white and had much larger budgets to work with, as well as many talented ex-Disney artists. The most famous character from his time at MGM was Droopy the dog, who debuted in the movie, Dumb-Hounded (1943). After a year off in 1950 to recuperate from over-work, Avery was back at MGM in October 1951. In 1953, he was burnt-out and left MGM to return to the Walter Lantz studio.

He directed four cartoons in 1954 and 1955 but then left the studio because of a salary disagreement.

Avery moved into animated television commercials, one of the more popular ones for Raid insect repellent.

In 1935, Tex Avery married Patricia, and the couple had two children.

On 26th August 1980, Avery died in hospital in Burbank, California, from lung cancer.

Tex Avery left the incredible legacy of laughter to the world. The whole world knows his cartoon characters, and they are loved today as much as when they were first created. Special collections of his work have been released at different times to honor him.