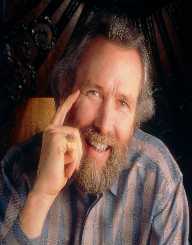 Jim Henson was an American artist, cartoonist, and puppeteer born on September 24th, 1936. He was also a filmmaker and screenwriter best remembered for creating The Muppets. Also, his major work was the creation of Fraggle Rock and Sesame Street. The creative artist made children’s’ show puppets including The Junior Morning Show, a local Television show. During his high school days, he entertained his friends with his puppet shows. His good work earned him the Hollywood Walk of Fame together with his creastion Kermit the Frog.

Jim Henson was born on September 24th, 1936. His place of birth was in Greenville, Mississippi in the United States but grew up in Leland, Mississippi. He was the last born child of Paul Ransom Henson and Betty Marcella and had one older sibling. His father served in the U.S. Department of Agriculture as an agronomist. In the fall of the 1940s, his family moved to University Park, Maryland, situated near Washington, D.C.

Jim Henson attended Northwestern High School. In 1954, while still in the high school, he began making puppets for The Junior Morning Show of WUSA-TV (previously WTOP-TV).  He later graduated from high school upon which he joined University of Maryland, College Park. While there, he specialized in studio arts. He also studied College of Home economics of the university and graduated with a degree on the same in 1960.

Jim Henson created puppets for Sam and Friends on local NBC affiliate in 1955. In 1958, the show was honored with a local Emmy Award. In this year, Henson also established the Jim Henson Company. His puppets became widely recognized as he continued creating them for TV shows. In fact, some of the puppets began featuring in commercials.

Henson’s puppet Rowlf the Dog was his first Muppet to be exposed on a national level. The puppet featured in Purina commercials as well as in 1963 The Jimmy Dean Show.

In the 1970s, Henson’s career rose to greater heights, especially with The Muppet Show. This show made him quite famous.  By 1975, he had created Miss Piggy, Animal, Fozzie, Scooter, and Gonzo for The Muppet Show. With his show, he was honored with three Emmy Awards.

In the 1980s, Henson created TV series such as Fraggle Rock, Jim Henson's The Storyteller and The Jim Henson Hour. Later, he developed what was to be his last project, Muppet*Vision 3D.

In 1959, Jim Henson wedded Jane Henson. The couple was blessed with five children, Lisa, Cheryl, Brian, John, and Heather. Jim Henson and Jane later separated in 1986. However, they never divorced. Their son John passed on when he was 48 years old after he suffered a heart attack.

Jim Henson breathed his last on May 16th, 1990 after a pneumonia attack. At the time, he was 53 years old. His body was cremated then ashes spread near Taos, New Mexico in the United States. During his celebratory funeral, a puppet performance was performed in honor of the great puppeteer.