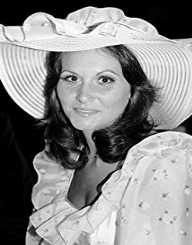 American actress Linda Susan Boreman was born on the 10 January 1949 in The Bronx, New York City. Her father was a policeman, and she was said to have had an unhappy life homelife growing up.

Linda Lovelace did various jobs after leaving school including working in retail and as a photographer. She met  Chuck Traynor in 1970, and he convinced her to appear in his pornographic short films which were shown illegally.

In 1972 Linda Lovelace starred in a film Deep Throat which became notorious during the 1970s and made her name internationally as a pornographic star. Some reviews were positive commenting on the humor and style in the film. A sequel followed in 1974, and she also starred in Linda Lovelace Meets Miss Jones (1975) and Linda Lovelace For President (1975).

After her divorce from Traynor, Linda Lovelace claimed that he had forced her into doing pornography. She began campaigning against pornography, and she testified in front of the Meese Commission. This commission had been set up by President Ronald Reagan to investigate what effects pornography have on women and children.

In her autobiography Out of Bondage (1986), Lovelace claimed that the New York Mafia had profited from Deep Throat. She claimed the amount involved was in the region of $600 million. Lovelace also wrote in the book that she had contracted hepatitis and had breast cancer which she said was caused by silicone implants.

Linda Lovelace married the pornographer Chuck Traynor in the early 1970s. He later divorced her to Marilyn Chambers. Lovelace later married Larry Marchiano. The couple had two children together.