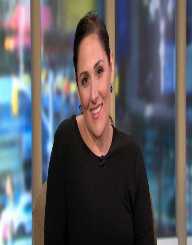 Ricki Pamela Lake was born on September 21, 1968, in Hastings-on-Hudson, New York. Her mother Jill was a homemaker, and her father was a pharmacist. She was mostly raised by her father’s mother Sylvia Lake until she died in 1978. After finishing high school, Lake attended the Ithaca College but dropped out after a year of studies.

Lakes film debut was in the John Waters’ 1988 film Hairspray. Her role as Tracy Turnblad brought Lake a lot of attention. Lake and Waters continued to collaborate on many other films, like Cry-Baby, Cecil B. Demented, and Serial Mom. Her next films were Mrs. Winterbourne and Inside Monkey. Lake earned widespread recognition after she was cast in the Vietnam War drama television series China Beach.

After her career picked up, Lake began to star in several television shows. She was cast in the CBS situation comedy The King of Queens and was a guest star in Drop Dead Diva television series.

When Lake was 24 years old, she began hosting the talk show Ricki Lake. She became the youngest person at the time to host a talk show. The show debuted in 1993 and lasted until 2004. Sony Pictures Television wanted Lake to continue work on the talk show, but she decided to spend more time with her family. Lake went to New York and filmed the 11th season of the show.

After wrapping up her show, Lake took a short break but returned in 2006. She began hosting the series Gameshow Marathon- a classic game show recreation with celebrities as contestants. In 2007, Lake starred in the TV movie Matters of Life and Dating and made a cameo appearance in the film Hairspray. In 2008, Lake’s documentary film The Business of Being Born about home birth and midwifery was released. The film was premiered at Tribeca Film Festival. The film included Lake’s own experience with home-birthing. She continued to work on the topic and co-wrote the book on natural childbirth Your Best Birth.

Until 2012, Lake appeared in various programs and talk shows and expressed her willingness to return to the talk show scenery. She was a competitor on Dancing with the Stars 13th season. In 2011, she was signed by Twentieth Television to create The Ricki Lake Show. The show premiered in September 2012. For her work on the show, Lake won the 2013 Daytime Emmy Award for Outstanding Talk Show Host.

In 2014, Lake and Abby Epstein began working on a new documentary about the dangers of hormonal birth control. The film, Sweetening the Pill is based on the book by Holly Grigg-Spall titled Sweetening the Pill Or How We Became Hooked On Hormonal Birth Control.

In 1993, Lake met illustrator Rob Sussman. The couple married in 1994. They have two sons- Milo Sebastian and Owen Tyler. Water birth of her sons was shown in The Business of Being Born. Lake and Sussman filed for divorce in 2003 and were officially divorced in 2005. In 2009, Lake began dating Christian Evans. They got engaged in 2011 and married the following year. However, the couple filed for divorce in 2015.

Lake has struggled with maintaining her weight for several years. In the 1990s, her weight was 260 pounds. In 2007, she pursued a new diet and lost 24 pounds. The same year, she told the press that the reason for her obesity is childhood sexual abuse. In 2011, she competed at the PokerStars Caribbean Adventure Luxury Ladies Poker Event and finished sixth.