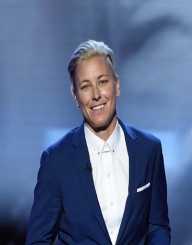 Abby Wambach was born on June 2nd, in 1980. She is famous for being a former U.S. women soccer team player. During her prime career, she bagged home two Olympic gold medals at the FIFA Women’s World Cup.

Aside from this, her success on the pitch has earned her the United States soccer athlete of the year award six times.

Mary Abigail Wambach was born on June 2nd, in 1980. Her birthplace was in Rochester, New York. She was the last born daughter to Judy and Pete Wambach. Right from a tender age, Wambach was introduced to soccer by one of her sisters who made up her mind in trying to play the sport.

In 1994, Abby Wambach joined Our Lady of Mercy High School. She studied here for four years and left in 1998. She played soccer as her favorite sport in high school.

She managed to score about 142 goals in total while she was still in high school. Her talent on the ball had been noticed, and Umbro voted her as the player of the year. With her exceptional talent, Wambach was in high demand by numerous colleges. She, however, took the advantage of an athletic scholarship offered by the University of Florida situated in Gainesville.

Here, Wambach went to play under the notable college coach called Becky Burleigh. She played for the college since 1998 and left in 2001. Later on, in 2012, Wambach was inducted into the university’s Hall Of Fame.

In 2002, Abby Wambach joined the Women's United Soccer Association league by playing for the Washington Freedom club. With time, a new professional soccer league was introduced and that Wambach went ahead and played for clubs such as the Western New York Flash and the National Women's Soccer League club.

In 2001, Wambach earned herself a position in the U.S. women’s national soccer team. She went ahead and played her debut game in September that year. Her first international game was against Germany. Wambach helped her team to beat Germany 4-1.

During the 2003 FIFA Women’s World Cup, Abby Wambach contributed a lot in ensuring that the team reached the semi-finals. They, however, lost their game to Germany after being beaten 3-0. They won the third place position after beating Canada 3-1.

In 2004 Summer Olympics that took place in Greece, the U.S. soccer team bagged home the Olympic gold medal after defeating Brazil 2-1 in the finals.

The women’s team also performed well at the FIFA Women’s World Cup. They faced their rivals Brazil in the semi-finals and were defeated 4-0. Nonetheless, they managed to secure the third place following their victory over Norway.

Abby Wambach tied the knot with her girlfriend named Sarah Huffman in 2013. Later, in 2016, she entered into a relationship with a notable author called Glennon Doyle Melton. The two wedded in May 2017.