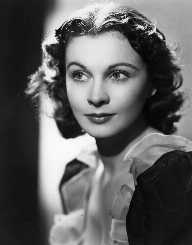 Vivien Mary Hartley was born on 5th November 1913 in Darjeeling (India), then under the British rule. She was the only child of Ernest Richard

Hartley and his wife, Gertrude Mary Frances. She was a British National. Her father was born in Scotland in 1882 and her mother in Darjeeling in 1888. They were married in 1912 in London.

Mr.Ernest Hartley came to Bangalore (India) in 1917 as a staff of the Army. His wife and Vivien stayed in Otacamund in India.

Vivien Leigh joined a Convent School at Darjeeling and was then sent to Sacred Heart at London. She also attended schools in Europe while her parents were traveling. She learned French and Italian fluently.

Vivien Leigh married Herbert Holman, a barrister and very senior to her in 1932 and had a daughter, Suzane in 1933. They got separated in 1940. But they remained friends for the rest of their life.

Laurence Oliver met Vivien to congratulate her for her performance in a film in 1940. They developed a friendship. They got married after they got divorced from their respective spouses, in 1940. Again she got separated from Oliver in 1960.

Britain confirmed “Knighthood” to Oliver in 1947. Vivian was known as “Vivien, Lady Oliver,” even after divorce, as was the social custom.

Vivien Leigh, at the age of three, made her debut stage appearance for her mother’s theater group in 1917. Gertrude Hartley introduced Vivien to works of great authors, Greek mythology and Indian folk stories. She appeared in her first film as a schoolgirl in “Things are Looking Up.” The reviews on her role in “The Mask of Virtue” in 1935 were excellent.

Oliver and Vivien acted together as lovers in a film, “Fire Over England” in 1937. Vivien read a novel viz.,” Gone with the Wind.” A film under the same title based on the novel was under production. Vivien desired to play a leading role in that film.

In 1938, she appeared in a film, “A Yank at Oxford” and she received attention in the USA. She also appeared in “Sick Walks of London.” She was criticized as a terrible actress because of her changing moods.

Vivien Leigh had joint ventures with her husband, Oliver. There was criticism for and against their performance. The film “That Hamilton Woman” in which both husband and wife starred became a success and famous in the USA and the Soviet Union. The film was even screened at a party where Franklin D Roosevelt was present.

Vivien resumed her career, after a brief illness and treatment, in 1948.  A film “The Skin of our Teeth” in which she had a leading role was produced.

The Olivers toured Australia and New Zealand for six months to raise funds for a theatre. The tour was a success. They played in “The  School for Scandal” and “Skin of our Teeth.” Later, they started their “West End” appearance together.

Vivien Leigh then played in “A Street Named Desire.” She was awarded The “Best Actress” for her performance in the film.

In 1939, Vivien Leigh got the Best Actress for “Gone with the Wind” from Academy Awards. Best British Actress from BAFTA Awards

In 1963 Tovarich – Best Leading Actress in a Musical and many more.

During 1944, Vivien Leigh was ill and treated for tuberculosis. She was in deep depression and sometimes hysterical. She recovered and continued her acting. The illness recurred in 1967, and her lungs collapsed. She died in July 1967 in London.