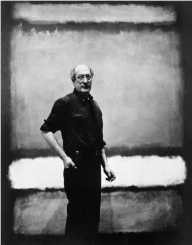 Mark Rothko was born on 25th September 1903 in the Old Russian province of Dvinsk to a Pharmacist named Jacob Rothkowitz. He had three other siblings in his growing up years. His father was an orthodox Jew by inclination, and when he was aged five, he was enrolled in a Talmud study center. The older Rothko moved to the U.S. as the threat of the Russian imperial army loomed larger. By the time he was ten years old, Mark Rothko was able to join his father in the states. It was not long after the family reunion that Mark’s father died and he had to pick on menial jobs to support his family.

Mark was enrolled in Lincoln High School, and by the year 1921, he was able to complete his studies with distinction. He became the recipient of a Yale scholarship but got back to working odd jobs to support himself after the award fell through.

Mark Rothko moved to the state of New York in 1923 and began working in a garment company. He also went for further studies at the New York School of Design, and this helped to expand his horizon and brightened his prospects.
Mark got together with some young artists in the year 1928 and put his works on display at the Opportunity Gallery. His compelling viewpoint was that art was a veritable tool that can be used to vent emotional expression. In the following year, Mark started off as a tutor at the Center Academy, where he taught clay sculpture and painting. In the years that followed, he was able to collaborate with other like minds to horn his abilities.

Mark Rothko went on a solo exhibition in the year 1933 at the Portland Art Museum, and his drawings were the center of focus. He also highlighted his students’ artistic efforts at the Center Academy. Mark's idea of a solo run continued in the city of New York with his works put on display at the Contemporary Arts Gallery’. He put up fifteen of his works in paintings as well as drawings on exhibition.

Mark Rothko collaborated with other like minds that included Ilya Bolotowsky in the year 1935 to advocate for the rights of artists. He also placed his purview on mastering his hue of designs and art forms during this time. This became the frontier for the development of his trademark. At the dawn of 1940, Mark Rothko was up again to foster the rights of artists, and he worked with others to establish the Municipal Art Gallery. He took his gaze from new works at this time and delved into the study of the literature of Friedrich Nietzsche. He also reviewed the likes of Sigmund Freud and James Frazier.

Mark's art life was up again in the year 1942 when painted “The omen of the Eagle,” and Friedrich Nietzsche's viewpoints hugely influenced this. He was on a solo run again at The Art of This Century Gallery in the year 1945. His masterpiece on display here was the Slow Swirl at the Edge of the Sea. Multiform themes took his gaze going forward, and he explored paintings that came out as Untitled and No 18. These were his expressions that he zeroed in on in his later years. Mark took his solo exhibition to Europe in the next decade beginning from 1950 and made stops in Holland and later on, in Japan. The Rothko Chapel was birthed in the 1960s and sprang to life in the city of Houston in the American state of Texas. This became fruition after six years of his determination and commitment to the cause.

Mark Rothko is remembered for his dedication to raising young minds and collaborating with like minds in his genre of artistic expression. He is seen as one who took his arts beyond the representational realm to express his religious and emotional inclinations. The use of rectangular art forms was established as his trademark after early experimentation. He was figurative and yet emotional in his emblematic protrusions that unmistakably stood out as his hallmark. Mark used bright color fields, still life edge as well as landscapes to depict his perception of the spiritual. The right to self-express was one that Mark fought for on behalf of other artists, and this liberty was one he did not want the lure of monetization to take away. He confronted the art establishment of his day and would not be drawn to expressions just for the sake of sales or monetary benefits.

Mark Rothko leaned towards the myths and legends of Greco-Jewish themes and cut a frame as one tortured creative that showed up climactically when he slashed his wrist and bled to his death. His views were undeniably unique, and while he painted and depicted these in his works, He vividly smuggled himself into the eternal consciousness of humanity as one of the literary greats that will not be forgotten.

Some of the paintings of Mark Rothko that became a runaway success included the White Center as well as “Orange, Red, Yellow.” The latter sold for a mouth-watering 86.9 million in USD while the former was snapped in for 72.8 million USD.

Mark Rothko got married in 1932 to Edith Sachar, but the pair separated. Later in 1945, he married Mary Alice Beistle. His two offspring were named Kate and Christopher.