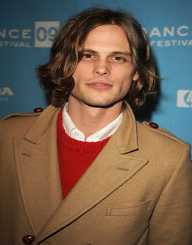 Matthew Gray Gubler was born in Las Vegas, Nevada on March 9, 1980. His mother is a rancher and political consultant, and father is an attorney. His grandparents were the founders of Las Vegas first radio station - KENO.

Gubler went to Las Vegas Academy of International Studies, Visual and Performing Arts. He majored in acting, although he wanted to study filmmaking. After graduating, he went to study at New York Tisch School of the Arts, where he majored in film directing.

When Matthew Gray Gubler was studying in NYU film school, Gubler worked with DNA Model Management. He modeled for Tommy Hilfiger, Marc Jacobs, and American Eagle. Despite his highly successful modeling career, Gubler was still interested in the film industry. He took an internship with Wes Anderson, who encouraged him to audition for his movie The Life Aquatic with Steve Zissou.

Matthew Gray Gubler landed the role, and this later led to land the part of Dr. Spencer Reid in Criminal Minds. The show ran at the same time as the famous series Lost. Therefore, it was initially pegged as a losing enterprise. Later on, Criminal Minds started to beat Lost in the ratings and are currently in its 12th season.

Matthew Gray Gubler has voiced the character of Simon, the smart Chipmunk in three Alvin and the Chipmunks movies. He was the main character in How to Be a Serial Killer (2008) and as Paul in (500) Days of Summer. In 2014, he starred in the film Suburban Gothic, for which he won the Screamfest Award for Best Actor.

While Matthew Gray Gubler was working on the film The Life Aquatic with Steve Zissou, he made a documentary titled Gubler's Life Aquatic Intern Journal. The behind-the-scenes documentary was included in the DVD release of the Criterion Collection. He also directed, edited and co-produced the music video for The Killers “Don’t Shoot Me Santa.” He has also directed several Criminal Minds episodes.

Matthew Gray Gubler started to post his pictures on a website in 2005. He worked with watercolors, gouache, oil, and pastel. In September 2005, he had his first exhibition in the Gallery of Fine Art in the Czech Republic. The gallery held a showing of 12 of his watercolors, which were all sold. His art has also been featured at The Little Bird art gallery in California. In 2011 his painting “Mushface” was sold on eBay for $10,000. He donated the money to Smith Center for the Performing Arts in Las Vegas.

Matthew Gray Gubler is not married and does not have any children. He lives in Los Angeles, Las Vegas, and New York, depending on his filming schedule. In 2009, he had a knee surgery due to a knee dislocation he acquired while dancing. He had to use a cane for a year.