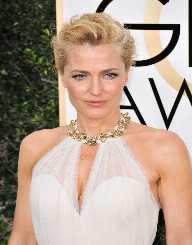 Star of the popular science fiction drama The X-files, Gillian Anderson is an American actress, writer, and social worker. Apart from her famous role as Special Agent Dana Scully, Gillian Anderson has also appeared in several films like The Last King of Scotland and TV series such as The Fall.

Gillian Anderson was born on August 9, 1968. Her birthplace is Chicago, Illinois. Her star sign is Leo. Her full name is Gillian Leigh Anderson. Her father Homer Edward Anderson owned a film post-production company, and her mother Rosemary worked as a computer analyst. Gillian Anderson spent most of her childhood in London where her parents moved shortly after her birth.

Anderson was a notorious teenager and was difficult to control in her childhood. She took drugs and dated much older boys. Fearing that she might go down the wrong road, her parents put her in therapy at the age of 14.

Young Gillian Anderson was interested in becoming a scientist. She was particularly fond of marine biology and archaeology. But after attending a few theatre performances, she changed her passion towards becoming an actress.

She was attending the City High School then. Acting also helped her overcome her wild behavior, and she changed from Most likely to be arrested to Most Improved Student. She graduated high school in 1986 and went to the DePaul University’s Goodman Theater. She graduated with a B.A. in Fine Arts.

Anderson’s moved to New York when she was 22 years old in hopes of becoming an actress. She struggled to get noticed at first, however, and worked as a waitress to pay the bills.

She first appeared in the play Absent Friends which won her the Best Newcomer Award. Next, she was cast in The Philanthropist. She then appeared in minor roles in a few films. Her big break came with The X-Files in 1993.

The X-Files And Major Success

Gillian Anderson began to play Special Agent Dana Scully on The X-Files in 1993. The show made her instantly famous as it became a mega-hit. The show ran successfully for ten years before concluding in 2002. For her role in the TV show, Gillian Anderson won multiple awards including an Emmy and a Golden Globe. Gillian Anderson was also the first woman to write and direct an episode of the X-files. She also appeared in the film The House of Mirth.

After the show ended, Gillian Anderson returned to England. She decided to appear on theater again and appeared in What the Night is for. Two years later, she played artist Dana Fielding in The Sweetest Thing in Baseball. In 2006, she appeared in the film

The Last King of Scotland.  Two years later, she starred in the film How to Lose Friends and Alienate People and in 2009, she appeared in Boogie Woogie. In 2013, Gillian Anderson joined the cast of The Fall – a critically acclaimed crime drama series.

She continued to do stage plays, and her performance as Blanche Dubois in A Streetcar named Desire was widely praised. One year later she released her book A vision of Fire. She is currently appearing on the TV show American Gods.

Gillian Anderson has received several awards and nominations in her career. She won an Actors Guild Award for Outstanding Performance by a Female Actor in a Drama Series in 1996.

One year later, she won an Emmy for Outstanding Lead Actress in a Drama Series. In the same year, she won a Golden Globe award and a Screen Actors Guild Award. She was appointed an honorary Officer of the Most Excellent Order of the British Empire in 2016.

Gillian Anderson has been married twice. Her first marriage was to Clyde Klotz in 1994. The marriage lasted three years. In 2004, she married Julian Ozanne.

They divorced in 2006. Gillian Anderson then dated Mark Griffiths for the next six years. She has three children.Anderson loves collecting art and practices meditation daily.