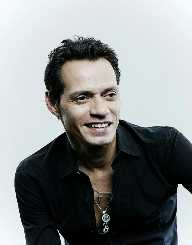 American Salsa artist Marc Anthony was born in New York City into a Puerto Rican family on the 16 September 1968. He is the son of Guillermina and Felipe Muniz and was born the youngest of eight children.

Marc Anthony initially sang English language dance music. Early albums include Rebel (1988) and When the Night is Over (1991). After changing his singing style to Salsa, he released his first Salsa album, Otra Nota came in 1993. He was subsequently offered a contract with RMM Records.

In 2011 Marc Anthony took part in the Latin television series Q’Viva with Simon Fuller and the following year he was a mentor on The X-Factor: Season Two.

Marc Anthony won a Grammy in 1998 for Best Latin Tropical Performance for Contra La Corriente. He won a second Grammy for first Latin Grammy Song of the Year Award for Dimelo (2000). At the ASCAP Film and Television Music Awards in 2001, he shared the Most Performed Songs from Motion Pictures award with Mark Rooney for You Sang to Me.

In the mid-1990s Marc Anthony was in a relationship with Debbie Rosado. They have one biological daughter and one adopted daughter: Arianna and Chase. In 2000 Marc Anthony married Dayanara Torres, and the couple had two sons: Christian and Ryan before divorcing in January 2004. In June 2004 Anthony married the singer Jennifer Lopez, and the couple had twins: Emme and Maximilian. They divorced in 2012. He then married Shannon de Lima in November 2014. In 2017, Anthony and de Lima ended their marriage.