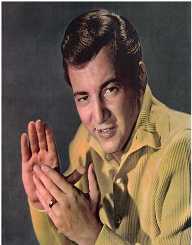 Walden Robert Cassotto better knows as Bobby Darin was a multi-talented American singer and songwriter. Born on May 14, 1936, he was also a film and television actor, a multi-instrumentalist and a political activist. He did genres of music including country music, pop, swing, jazz, rock and roll, and folk songs. Darin started his musical career as a songwriter for American pop singer Connie Francis. In 1958, he recorded his debut single Splish Splash, which was a huge success. He rose to fame with singles like Mack the Knife, Dream Lover, and Beyond the Sea. Mack the Knife achieved instant success, selling more than 2 million copies and hitting No. 1 on the chart. The song earned Darin a Grammy Award for Record of the Year in 1960.

Bobby Darin made an acting debut with the film Come September in 1961 co-starring his wife, Sandra Dee. His performance in that film won him a Golden Globe Award in 1962.

With the growth in popularity, Bobby Darin became very active in politics in the 1960s. He played an active role in the presidential campaign of Robert F. Kennedy and mostly travelled with him. On the night of June 4, 1968, when Kennedy was assassinated Darin was also at the Ambassador Hotel, Los Angeles. That incident coupled with finding out about his birth mother ended him in solitude. He died after heart surgery in Los Angeles.

Walden Robert Cassotto (Bobby Darin) was born to Vanina Juliette "Nina" Cassotto in East Harlem in New York City. He was born out of wedlock and to keep it as a secret his maternal grandmother Vivian Fern Walden raised him. He was told Nina was instead his older sister and for years, he regarded her as such. He was only told the truth when he was 32 years, and that affected him much.

Growing up Darin learned how to play several instruments including guitar, drums, piano and later xylophone. He received education from the Bronx High School of Science. According to him, he was always teased by brighter students and attributed his arrogance in later life to that experience. Graduating from high school, he enrolled at Hunter College where he ended up in the drama department. He dropped out of school to pursue acting after the second semester.

In 1995, Bobby Darin met Don Kirshner at a candy shop in Washington Heights, with whom he later formed a songwriting partnership. This was how his musical career started. He signed a contract with Decca Records in 1956 but achieved little success with that deal. Darin was introduced to pop singer Connie Francis and began writing songs for her. The two became lovers later, but disapproval by Connie’s dad split them apart. After leaving Decca, Darin signed with Atco, a subsidiary of Atlantic Records. He started as a writer for himself and others.

In1958 Bobby Darin received guidance from Ahmet Ertegun, a star-maker with AtlanticRecords leading to his debut recording “Splish Splash.” He wrote the song with DJ Murray Kaufman. Splish Splash became an instant hit selling more than one million copies. His next hit was the ballad, Dream Lover, which became a multi-million seller. Darin continued releasing hits after hit with his single “Mack the Knife” winning a Grammy Award for Record of the Year in 1960. He also received Grammy Award for Best New Artist. The song has been given a Grammy Hall of Fame Award. Soon to follow was Beyond the Sea, a jazz English rendition of the hit song La Mer by Charles Trenet.

In the late1950s, Bobby Darin played at the Copacabana nightclub in Manhattan, setting an all-time attendance record. He also headlined concerts at major casinos in Las Vegas. Darin established the music production and publishing company TM Music/Trio with Terry Melcher. The company’s first signee was Wayne Newtown whom Darin gave the song Danke Schoen. The song became a hit putting Newton into stardom.

The versatile musician also went into country music with hit songs like Things, and You’re the Reason I’m Living. He formed the record label, Direction Records in 1969. The label was predominantly into folk and protest music. In his later year, he delved into politics joining the campaign train of Robert F. Kennedy. He was also at the Ambassador Hotel, Los Angeles where Kennedy was assassinated. Darin also found out that the woman he regarded as the older sister was his biological mother. The two incidence got him devastated.

Walden Robert Cassotto started his acting career by playing Honeyboy Jones in the CBS military sitcom Hennessey in 1959. In 1961, he had his significant film role in Come September, which won him a Golden Globe Award for "New Star of the Year – Actor" in 1962. He also starred in films like Pressure Point and Captain Newman, M.D. the film won him a nomination for Best Supporting Actor at the Academy Awards.

Bobby Darin was married twice, first to actress Sandra Dee whom he met while shooting the film Come September. The couple had a son Dodd Mitchell Darin. They divorced in 1967. He then married the legal secretary, Andrea Yeager. The two met in 1970 and married in 1973. After living together for four months, they divorced due to Darin’s health problems. Before his marriages, he had had a relationship with a waitress, Lilian Sweet, with whom he had a child.

Bobby Darin had health problems since childhood. From age eight he had several bouts of rheumatic fever leading to a weak heart. In January 1971, Darin had heart surgery with two artificial valves being implanted in his heart. In 1973, he had a dental session forgetting to take his antibiotic, which protected his heart. This led to systemic infection (sepsis) that affected one of his artificial valves and weakened his body. He went in for heart surgery to repair the damaged valves but was unsuccessful as he died on December 20, 1973, a day after the surgery. According to his last will, his remains were donated to the UCLA Medical Center now (Ronald Reagan Medical Centre) to be used for medical research.