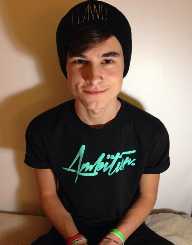 YouTuber and actor Kian Robert Lawley was born on the 2 September 1995 in Sioux City, Iowa and raised in San Clemente, California.

Lawley was initially part of the channel Our2ndLife with Sam Pottorff, JC Caylen, Trevor Moran, Connor Franta and Ricky Dillon. After the group stopped working together in late 2014, Lawley and Aylen founded their KianAndJc channel in January 2015. Lawley’s channels have had over two million views and had over three million subscribers.

Lawley’s film debut was in 2015 when he starred in The Chosen which premiered at the 2015 VidCon Convention. The same year, at the Teen Choice Awards, he was presented with the Choice YouTuber award. The following year, Lawley starred in Shovel Buddies alongside Bella Thorne and followed that up with Boo! A Madea Halloween, cast as Bean Boy.

In April 2017 Lawley started in a new show H8TERS with Calen. He also appeared in Before I Fall.

Lawley and Calen co-authored the book Kian and JC: Don’t Try This At Home.