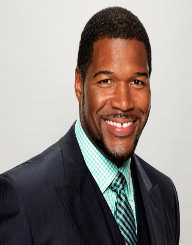 American footballer and media personality Michael Strahan was born on the 21 November 1971 in Houston, Texas to Gene Strahan and Louise Traylor. He was one of six children. His father, Gene, was in the U.S. military and Strahan spent some of his childhood in Germany. When he was in his teens, he was sent home to live with relations and attend high school in Houston, Texas.

Michael Strahan was a pupil at Westbury High School, Strahan in Houston, Texas as well as the Mannheim American High School in Germany. After his high school graduation, he attended Texas Southern University, having won a scholarship. It was during his time at university that he was drafted into the New York Giants.

Between 1993 and 2007, Michael Strahan played NFL football for the New York Giants, retiring in 2007. He became a full-time starter with the Giants in his second year with the team in 1994. In 1997 he achieved his first double-digit quarterback sack season (14). The following year he achieved 15, and by 2001, he broke the NFL single-season record by achieving 22.5 sacks. By the time he retired his total was 141.5 quarterback sacks. In his final season with the Giants in 2007, the club won its first Super Bowl in almost twenty years when they beat the New England Patriots.

In 2008 Michael Strahan began working in sports commentary, initially as an analyst with Fox Sports. At the same time, he began appearing in various commercials, including Subway commercials. He was appointed co-host of Live! With Kelly in September 2012, replacing Regis Philbin and the show was rebranded Live! With Kelly and Michael. Strahan remained with the show until April 2016 when he joined Good Morning America.

In 2014 Michael Strahan was inducted into the Pro Football Hall of Fame.