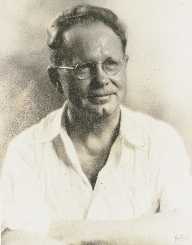 Grant Wood was an American painter born on February 13th, 1891. He is best remembered for his ‘American Gothic' painting. Regionalism came into being through his efforts with the help of Thomas Hart Benton and John Curry. Wood attended School of the Art Institute of Chicago. His fame had not begun at the time. He was still learning more about art, particularly painting. Before his fame, he also had an opportunity to tour Europe about four times. This was between the years 1920 and 1828. During this time, Grant Wood became acquainted with Post-Impressionist styles as well as the Impressionist styles. Among his major work were 1935 Death on Ridge Road, 1939 Parson Weems’ Fable and Iowa Cornfield in 1941

Grant Wood was born in born on February 13th, 1891. His place of birth was in Anamosa, Iowa in the United States. Sadly he lost his father in 1901 when he was still quite young. As a result, his mother moved him along with Nan his small sister to urban Cedar.

While studying in Grammar school, Grant Wood realized his passion for art. Later in high school, he gradually nurtured this passion in arts. Meanwhile, he came up with sets for various plays. In 1910, he graduated from his studies. Subsequently, he joined the Minneapolis School of Design and Handicraft.

During his student years, Grant Wood left no stone unturned. He widened his art knowledge by working with metal materials. Also, he worked with jewelry and built furniture at the same time. Eventually, these skills were of great help to him when he moved to Chicago. His talent helped him earn a living. Meanwhile, he took classes at the Art Institute during his free time.

Sadly, in 1916, Wood’s stepmother became ill. As a result, Wood left Chicago along with his sister and settled in Cedar Rapids. He then became a grammar teacher while continuing his artwork.

In the 1920s, Grant Wood traveled to Europe and had a golden opportunity of visiting many museums in Italy and France.  Also, he attended the Académie Julian during this time. He then exhibited his artistic work in Paris.

In 1929, he came up with his work Woman With Plant. The following year, he exhibited his work American Gothic at the Art Institute of Chicago. Immediately, he won the acclaim for his work. The image is still remembered as one of the best work in the history of the US. Later in 1932, he developed Daughters of Revolution.

In 1932, Grant Wood co-founded the Stone City Art Colony with the aim of helping artists with the great depression in his hometown. During this time, he turned out to be a great advocate of regionalism in arts. He lectured on the same all over his country.

In 1934, Grant Wood became a painting teacher at the School of Art of the University of Lowa. He taught at the university till 1941.

It is believed that Wood was a closeted homosexual. In fact, it is also believed that he was fired from his teaching job at the University of Lower following this controversy.

In 1935, Grant Wood tied the knot with Sara Maxon even though he is believed to have been homosexual. As a result, instead of living together happily after, they had a difficult relationship. Eventually, they divorced between 1938 and 1939.

After battling with pancreatic cancer, Grant Wood took his last breath on February 12th, 1942 in Iowa City, Iowa. He was 50 years old at the time. His body was laid to rest in Riverside Cemetery, Anamosa in Iowa.