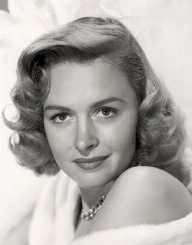 Donna Reed rose to fame as the Best Supporting Actress in 1953, all thanks to From Here to Eternity film. But that was not all; she made sure that she has received global recognition for her amicable role as Mary Hatch Bailey in the 1940s film. If she were alive, I would salute her with a Bundt cake that she loved to the core. Even then, her 1960s sitcoms show such as The Donna Reed Show reminds us that she is still amongst our midst. Reed striking beauty welcomed her into the world of fame. In short, she was a star of high brightness in the American history.

Donna Reed possessed a bold face and charming smile that was envied by all. She was assuredly created for others and not for herself. Being harsh and detrimental was something that was out of her dictionary. Throughout her career, Donna made sure that she has made great discoveries. It wasn’t by chance that she turned into a star in the entertainment field. Her creativity and unique spirit became evident from the first day she set her eyes on the prize. Her desire to push herself further allowed her to fathom to greater heights. The journey, motivation, thrill, and arrival made her day. In short, Reed was a first decision maker and life-mover.

A retired Naval Officer, Raymond E. Peet shared the same date, month and year of birth as that of our renowned actress. In short, both were born on January 27; 1921. Donna Reed’s bonafide names are Donna Belle Mullenger. She spent her childhood life in Denison, Iowa. Reed was the eldest sister of five siblings. At 16 years old, she joined Los Angeles City College, and it was here that she received the Campus Queen name. In the process, she appeared in Los Angeles Time cover page. Her beauty bombarded other executives and entertainment agents. For this reason, he was invited to a film test where she signed a long contract with Feldman-Blum agency.

In 1941 Donna Reed took a supporting role in the Shadow of the Thin Man thriller that also starred Myrna Loy. The following year she featured in films like Calling Dr. Gillespie, Private Hangover and See Here. After a short pause, she took a role of Gladys Hallward in The Picture of Dorian Gray film. Although the movie brought mixed reactions, it succeeded all when it reached the box office. All this time Donna worked under MGM contract.

Donna later got a temporary contract with Frank Capra’s Liberty Films where she appeared in It was a Wonderful Life film in 1946.The film also featured Mary Hatch Bailey. With all the effort, the film didn’t taste the box office critics. But it became a never-ending holiday favorite.

Donna’s motivation and creativity made her endure several years of untiring and not rewarding projects. She proved others wrong when she papered in From Here to Eternity film in 1953.To her surprise, the movie rocketed the 1954 Oscars. She was named as the Best Supporting Actress with an escort of eight awards.

Similarly to her tremendous recognition, Donna’s career didn’t show any signs of maturity. For this reason, Reed and her husband, Owens came to launch their own company, Todon Productions. With the passing of her film career, Todon Production introduced The Donna Reed Show in 1950s.The show became the perfect ambiance that welcomed Donna to her former talent. In 1958 Reed personified the mother of suburban America in her sitcom show. It was here that she garnered four Emmy nominations.

When it comes to her own life, Donna Reed played a significant role in America. She co-chaired Another Mother for Peace organization as well as being the anti-war activist. Donna battled with pancreatic cancer where she breathed her last in 1986 at 64 years old in California. It was in the same year that her family and close friends launched The Donna Foundation for the Performing Arts. The organization grants scholarship to teenagers who study Arts in general. Donna was married twice to producer Tony Owen and artist William Tuttle. Both of the marriages ended up in divorce. She then married Grover Asmus in 1975 till her demise.