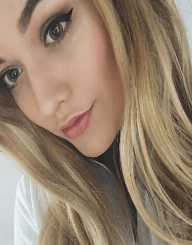 Felicite Grace Tomlinson was born on 16 August 2000, in Doncaster, England. Her parents are Mark Tomlinson and Johannah Poulston, and she has sisters Daisy, twins Phoebe and Charlotte. Felicite Grace also has a great half-brother Louis Tomlinson, a former member of the One Direction boy band.

She and Mark share the same mother, with twins Doris and Ernest Deakin born in 2014. Johannah divorced her father Mark in 2011 and married Dan Deakin in 2014. Felicite is sometimes known as Felicite Tomlinson Deakin. Her mother Johannah died in 2016, survived by the husband and seven children.

It was after KimmusicBGT YouTube channel uploaded a video of Felicite, her sister Charlotte dancing with friends to cover music Super Bass, that Felicite gained instant stardom.

While the other Tomlinson siblings are more active on YouTube, Felicite is more popular on Instagram and Snapchat.

In 2016, Felicite Grace started her website: FeliciteTomlinson.com to sell products. Part of the proceeds would go to a charity of her follower’s choosing. When it first started, the first lot went to UK’s Young Epilepsy Charity.

Felicite Grace follows in her mother Johannah’s footsteps in helping those who are disadvantaged.

Since her rise to fame, Felicite has her channel on Youtube named Felicite Tomlinson Deakin, and a shared one called Keeping up with the Tomlinsons, which she shares with her other siblings.Felicite Grace also had a clothing brand By Félicité Clothing, which sells online worldwide.

Together with older brother Louis, the family regularly donates money to charity and makes appearances in events.

Felicite Grace is studying in the United States. She aspires to be an actress one day.

Felicite Grace is close with her siblings, especially Charlotte, whom she appeared with regularly on Youtube and Instagram. Felicite is currently single, although she is actively dating.